Kiel is a city in Schleswig-Holstein, Germany.

Take the Bus No.82 to station “IKEA”, there is a huge cross. The best option is to stand on the green strip where cars turn to one's left. Either you can stand straight in front of the traffic light – the driver has enough time to wave you in – or just stand 100 meters behind the traffic light, works too.

Try to hitch either in the morning between 6 and 8 or in the afternoon between 3 and 6.you'll have the most traffic, because lots of people are on their way to or back from work and can often give you a ride straight to hamburg.try to avoid to hitch between 8 and 10am, traffic is low and most people head to destinations close around kiel.

After a while the motorway splits.Hamburg A215, direction Flensburg A210. A lot of cars do have the sign "RD" (Rendsburg), so you might focus these cars if you wanna go north...

From the main station take bus No.41, 42 or 71 till bus-stop “Stormarnstraße”, follow the roundabout till directory “Grünes Herz” and hold out your sign.

Another option is to take the next bus-station after “Stormarnstraße”, get out just behind the bridge, cars also have here a nice chance to pick up hitchhikers. Try to get a lift straight to Berlin or at least a gas-station on the A24, otherwise you might get lost..

If you got stuck in Kiel, contact Wukk for help. 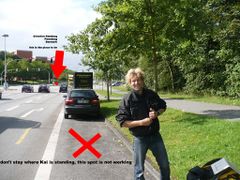