The first time hitchhiking, something that is always special. A bit scary sometimes as you don't really know what to expect. How did that go with Zoë, whose first hitchhiking trip was 888, the European Hitchhiking day?

Where did you start? 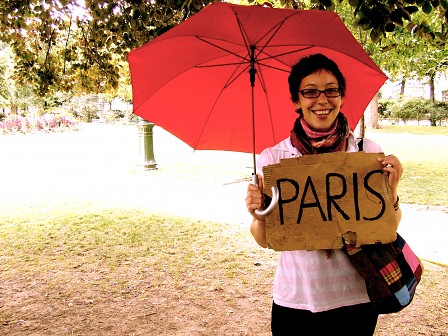 Zoe photographed in Paris at the 888-event

I took the train from Maastricht to Utrecht to join a pre-888 meeting, the hitchhikers gathering. I wanted to find someone I could travel with, as I didn't want to hitch alone. At the meeting I quickly found my partner. We got lost in Utrecht for two hours the next day as we were trying to find our spot. Some guy gave us a lift from the city and dropped us on the highway. There we waited for two hours.

But isn't that illegal?
Yes, and we were afraid that some police-car would stop to jail us, but a nice guy actually stopped and brought us to the first petrol station. There it finally really started. Until then I actually thought it was all just a big joke, that this whole hitchhiking thing wouldn't work.

At the petrol-station we also met another hitchhiker who was going to Paris and who had departed from Copenhagen. Later we met Jan from Berlin, and he was all covered with sweat as he had come walking to the petrol-station with his huge backpack. So we were all there, trying to find rides. But then I found one car with enough space for all four of us. (what happened then?)

Did it meet your expectations for the first time hitchhiking?
It was way better. I thought it was just from the highway with your thumb up. But it wasn't. It was just hitching from petrol-stations and it was quite safe, and really fun. Actually I didn't know what to expect, I thought I was going to die, haha. It did take longer than I thought though.

I decided only two days in advance to join, the day I heard about 888. I wanted to do something different, I was looking for some excitement and adventure. When I arrived the next day at the Utrecht meeting, everyone was fully prepared, with maps, signs and lists of the petrol-stations. I was a bit in shock then. I had zero preparation and came with a half-broken suitcase.

I was really surprised how much the trip helped me to build up self-confidence. Also the people I met at the event inspired me a lot. Most of the people who were there are very different from myself. I met someone who was 19 and who had hitchhiked for weeks already. He just had his backpack. And also people who had been traveling in that way for years on a row, without the need for some kind of security. That really is impressive.

So what's next for you?
Next is buying a backpack! I was hitchhiking with a suitcase and that doesn't work. It was even broken a bit, so I had to carry it along the highway and also in Paris when I got lost hitching out. So I am not hitchhiking anywhere until I have a good bag! Then, maybe hitchhiking across Australia or somewhere and meeting people along the way.

Going back home from Paris, you hitched by yourself. Were you afraid?
Yes, very much. I kept pushing my departure back for very long, to see if there was anyone who wanted to join me. But nobody did, so I had to go by myself. I was afraid in Paris itself, but once I was on the highway I was fine.

How do you approach your potential drivers?
With a big smile but I am also picky. I was looking for families, couples and women to hitchhike with. I think you have to be, it is one thing to hitchhike and trust people, but another to ... you know, I am a woman and also from South-Africa, where bad things happen relatively often. So what could happen to me is much more on the forefront of my mind. So I am definitely more picky. I actually ended up waiting at one petrol-station for some hours more as I could have, as I let a lot of cars go without talking to the drivers.

My last ride was going to Liège, which is about 20 kilometers away from my destination, Maastricht. But the final petrol-station, where we arrived at 12 at midnight, was closed. So I thought, I want to get home, but I don't want to spend the night here as a woman alone in the middle of the night with nobody there. So they dropped me at the train station, where I spend the night. That was really cold. That is by the way the next thing I really have to buy: a sleeping bag!

note: this article is also available on the Random Roads website, an online and print magazine about hitchhiking