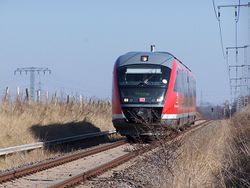 On some regional trains, there is a ticket machine. This varies from region to region, so you should check it before. If there is one, you could try to check if there actually is a conductor on the train before buying a ticket. Multi-waggon trains and conductors joining the train at a later stop make this quite risky, though. You're obligated to have a valid ticket as soon as you join the train so being in the process of buying does not help if you're considered a blackrider by the conductor.