Since February 2011, I maintain Globestoppeuse, a blog in French to promote general hitchhiking culture and my publications/talks. There's also a watch on Scoop.it, focussing on French media, but not only.

I give talks on various travel-related topics such as dumpster diving, hitchhiking, solar cycling and travelling solo as a women. The latter has been filmed and is available on YouTube.

I work for Sun Trip, a solar bike rally throughout Eurasia I took part in 2013. I used to live in Iqaluit, Nunavut and am knowledgeable about the Canadian Arctic.

I moderate the Hitchhikers group on Couchsurfing. But it's more symbolic than anything, as Couchsurfing seems to have sabotaged it's own community. I am also on BeWelcome and Trustroots.

I research on the following topics as a dilettante: hitchhiking, mobility, contemporary nomadism, women perspectives, sexual assaults and fear, etc. I'm willing to collaborate with anyone researching those topics, participating in interviews, sharing papers, ideas or networks. I'm not attached to any university. 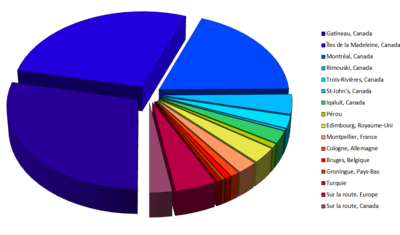 I have lived in a few places.

I co-wrote a book with two French guys, "La Bible du grand voyageur" (Lonely Planet, July 2014) - in Spanish "La Biblia del viajero" (Lonely Planet, June 2013). It's an howto manual about alternative travelling : hitchhiking, boat/plane hitchhiking, cargo ships, ridesharing, but also urban foraging (and foraging in general), hospex networks, spontaneous hospitality, urban camping, etc. I'd like to see it translated to English. Some early chapters are, and I released one of them, File:Hitchhiking - Neo-nomad.pdf

I contributed a story in German to HiT ThE ROaD: Das Tramper-Taschenbuch and in French to Pouceux - 60 récits de bord de route

See my blog for a complete list of publications. 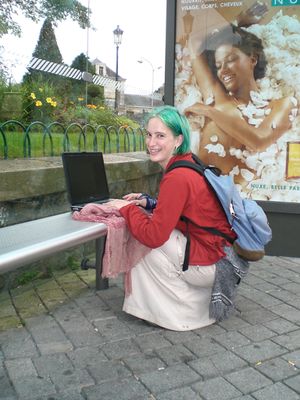 I estimate my hitchhiking experience to be around 150,000 km now.