Puebla is the capital of the Mexican state of Puebla.

There's a tollbooth just outside of town. You can get near there, at least from Cholula, by taking a bus to San Martín (about an hour, 10 pesos). Ask the driver to let you off at the highway (autopista or cuota), and you'll get dropped off more or less right at the slip. From there, it should be pretty easy to get a ride to the tollbooth (caseta) where you can then get a ride into Mexico.

Get to the tollbooth at via Atixcayotl. Go pass the caseta and walk about 100m until you see a cool place to hitchhike. Near the spot there's a free WC room. The traffic is going slow, and there's plenty of distance for the drivers to see you and stop. Very good spot. 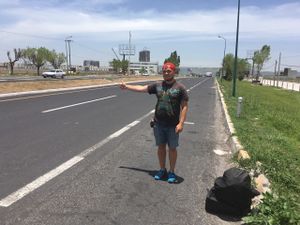 ATTENTION: It might be difficult to get to Toluca if you're heading from Puebla or Cuernavaca because of low traffic and a lot of villages on your way. Once El Chulito hitchhiked from Puebla in direction of Toluca, and after passing the village of Huitzilac to the MEX106 road he faced a very low traffic density there. This road is cool if you have a plenty of time and enjoy mountains, lakes and lagunas, but it might be difficult to find a place to hitch on some parts of the road because of very narrow paths.

Find your way to the main Puebla bus station, known as La Capu. Plenty of city buses and combis go here for around 6 pesos, or you can walk. From La Capu, invest 6 pesos in a bus to Amozoc, and ask the driver to drop you near the Caseta de Cobro Amozoc. There are constructions at the moment (February 2018). Zenit got dropped off right under the bridge and had to climb up to the highway right through the construction. Traffic from here will be heading to Veracruz, Tehuacán, and Oaxaca. A sign helps.

Another option is to take the bus from La Chapu to Amozoc and go off shortly after it turns left towards the highway at the end of Amozoc. There you will already see the highway. Just walk towards the toll station and go onto the highway. There is a nice spot for cars and trucks to stop which is also used by locals to sell snacks to drivers. A sign is not needed and if you go to Oaxaca not wise. You can get a car and let it drop you off where the highway starts towards Oaxaca. There you can walk down the ramp and stand on the side of the road and hh. There is also a bridge which gives you protection from sun or rain.

Downtown Puebla has a big food court called Sabores Poblanos. Table-diving is very possible there. Find it by Avenida 11 Norte and Avenida 4 Poniente.