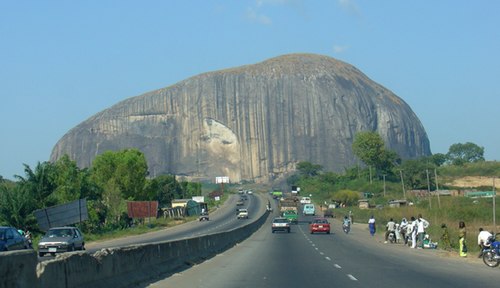 File:View77.jpg
The friendly people that gave hitchhiker Alyssa a ride to the Niger/Nigerian border. Rainy season in the desert.

It is best to try to find rides once outside the cities. Inside there are far too many taxis/moto-taxis/vans/buses hungrily searching for passengers. You can easily recognize them by typical green color with yellow strip in the middle. Not to mention hitching in plain view of hard working locals may instigate negative feelings from those looking desperately to make their $1 profit for the day. Get to the end of town and signal vehicles by holding out your arm horizontally, palm face down, and waving up and down.

Finding a place to pass the night is also as easy as asking to speak with a village chief or community leader. All the better if you have a tent. Even national parks (i.e. Yankari) or other tourist establishments (although these are admittedly very limited) may take you in if you approach in the right way. In the cities Couchsurfing and the like are becoming popular.

It is important to know which areas are safe and which are risky, as this can change rapidly. Locals will usually give reliable advice and contrary to popular belief, Nigerian police can be very helpful. As in many parts of Africa they will find it strange that a foreigner is travelling by hitchiking (most locals would not do it as they see it as begging and therefore below them, particularly on main roads where public transit is readily available). With all the political coups that reign throughout Nigeria's 50 years of independence, the police have learned to be somewhat suspicious and they may question your motives, so give them no reason to suspect you of being a spy. They are inherently suspicious of cameras, so keep them hidden around police and do not take pictures of government buildings. Otherwise police will generally not hinder you or ask for bribes. As is the case in most African countries, requesting bribes is reserved for rich people in shiny SUVs flashing fancy cameras and iPhones, not for slightly grubby looking foreigners 'begging' for free rides. In some areas, particularly farther north and east, the police may prove happy to assist with helping you find rides, or even offering a place to sleep.

If you are riding in a car altogether with locals during the night, you can be asked by the police if everything is OK. This is mostly because they want to make sure you are not kidnapped. Don't be surprised and/or blindsided.

It is also important to note that there is Islamic Sharia law in effect in the northern states. This issue has become more serious in recent years due to the increased activity of Al Qaeda affiliated group Boko Haram. Again, make sure to look into the current situation in the area you plan to travel through, and always ask for advice. Despite the Sharia law and its tendency to restrict women, it is possible for a solo woman to hitch solo throughout the country without issue (as Alyssa did in 2010), however being highly assertive is important.

Lastly, watch out for bad drivers. You will see a lot of wrecks on the side of the road. It is all the time handy to have some "first aid kit", for instance an old one from a car, with gloves.

English is the official language, and thanks to British colonialism and the structure of the country there is a relatively high level of education among the general population - most people speak at least conversational English. Most Nollywood films are in English or its relative creole/pidgin (which is almost an entirely unique language with its own grammar structure - difficult, but possible, to understand for the untrained English-speaker's ear). There are also over 500 local languages spoken throughout the country, some regional dialects, some completely unique. Every Nigerian will likely speak one or more of the three national languages: Hausa (north), Yoruba (southwest) or Igbo (south east). It can be helpful and a sign of respect to learn greetings and basic phrases in the language of the region you are traveling through. Even giving a shot at 'hello' will get smiles from anyone listening.