The #2 subway train out to the last stop, Wakefield-241st St and walking about a mile from there to the Mount Vernon East Metro-North station, where you can take a local train a bit farther afield. To hitchhike to Providence, Rhode Island on a cold winter's day, she took the $5.50 train to Noroton Heights in Darien, CT, usually with changing trains in Stamford, and officially started from there. She recommends this route for hitchhiking North, especially if you don't want to spend a lot of money getting out of the city or time waiting outside. In Noroton Heights there is an on-ramp about 1km from the train station. There is a steady flow of cars who mostly have to stop before entering the on-ramp, and the area is suitable for low-key camping out. A local police patrol car passed her while she stood with her thumb out but did not harass her. (Whereas, if you take the Metro-North train from Grand Central Station in Midtown Manhattan, you'll pay more than double for the ticket, plus the $2.75 subway fare to get to the station. So, if you're already on the subway, you might as well get the most of your $2.75 (or free swipe, see below) and take it as far out as possible.) Zenit followed these instructions in July 2010 and highly recommends them as well. Also on the train his ticket was never checked. Got a ride within 5-10 minutes at night using this around May 2018.

Taking the "B" or "D" subway to Fordham, and walking the six blocks south ("right") on Fordham Rd to Metro North. This requires less walking, and the New Haven Line trains stop here more frequently on their way north. Fares from Fordham to Noroton Heights are the same as from Mount Vernon East, and it is much easier/quicker to access.

Hitching along Bruckner Blvd near Brook Ave in the Bronx, reachable via the 6 subway train. (This section of Bruckner Blvd is used heavily by cars trying to get from Manhattan to the northeast-bound Bruckner Expressway without paying a toll.) Drivers may be less likely to stop in such urban surroundings, and you should exercise caution as the levels of both crime and police presence in this neighborhood are relatively high, but this is at least one option that does not require a commuter train. 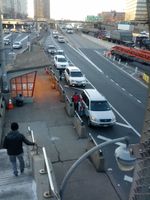 If heading towards Vermont, take the Metro North all the way to Danbury, CT (Change in E. Norwalk). The fare is $8 from Mount Vernon East ($9 from Fordham). This puts one right on Rt 7, which winds through the hills of Massachusetts and Vermont all the way to the Canadian border.