From Hitchwiki
(Redirected from Liftplaats)
Jump to navigation Jump to search 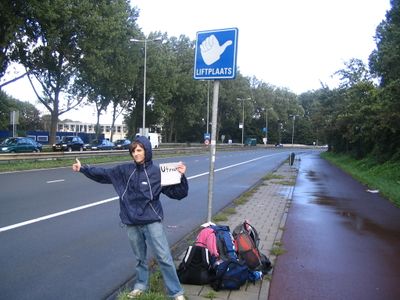 A liftershalte (also known as liftplaats) is a spot (halte means a stop, like busstop), marked by an official sign, where a hitchhiker can easily be picked up by car drivers. In Hebrew there is the term Trempiada that means a similar thing. Drivers may be aware of these spots and some may especially drive to the spot to pick up hitchers from there.

Designated hitchhiking spots are much more numerous in the countryside in some countries, especially in Belgium (VAP and Coivoit'stop), where hundreds of such spots exist. Also in Belgium still some of the designated hitchhiking spots created in 1978 are signposted, both in cities and on the countryside for example in Brussels. There are many local initiatives that support short distance hitchhiking with designated spots in France. In Germany local hitchhiking is encouraged by placing so-called Mitfahrerbänke (ride benches). These benches allow for a relaxed way of waiting for a local driver to pick people up. The development of these local designated sites is usually related to reduced public transport service.

This article contains text from the Wikipedia article on Liftershalte.