From Hitchwiki
< Hitchwiki:Community Portal
Jump to navigation Jump to search

This page is archived from time to time. Please help to answer questions and archive solved issues. When a question is answered, add relevant info to corresponding help or community page. Thanks!

Database dumps - Articles that could be deleted - Special pages

Leave your comments and questions below.

Can someone edit this link box and remove WORD visa from Nomadwiki (Wikitravel already has everything about it) And remove linked accommodation, food, busking, busking to keep only Nomadwiki and Trashwiki main pages linked!!!

Where to get Hitchwiki stickers? Year 2o2o thread

I've seen that the idea to make Hitchwiki stickers was proposed but I have seen nothing like it on the website. Wouldn't it be a good idea to make one now that the Hitchwiki logo is quit good ? I think that will be a very good way to spread the word about the hitchwiki, I've met a dozen of hitchhiker on the road this last week I could have give one stickers (with the url on it) to each of them. And we could stick them on hitchhiking spot What do you think ? --Dxc, 13. October 2020

You're super welcome to design one! I'm sure we could crowdfund to finance printing them. For the time being, 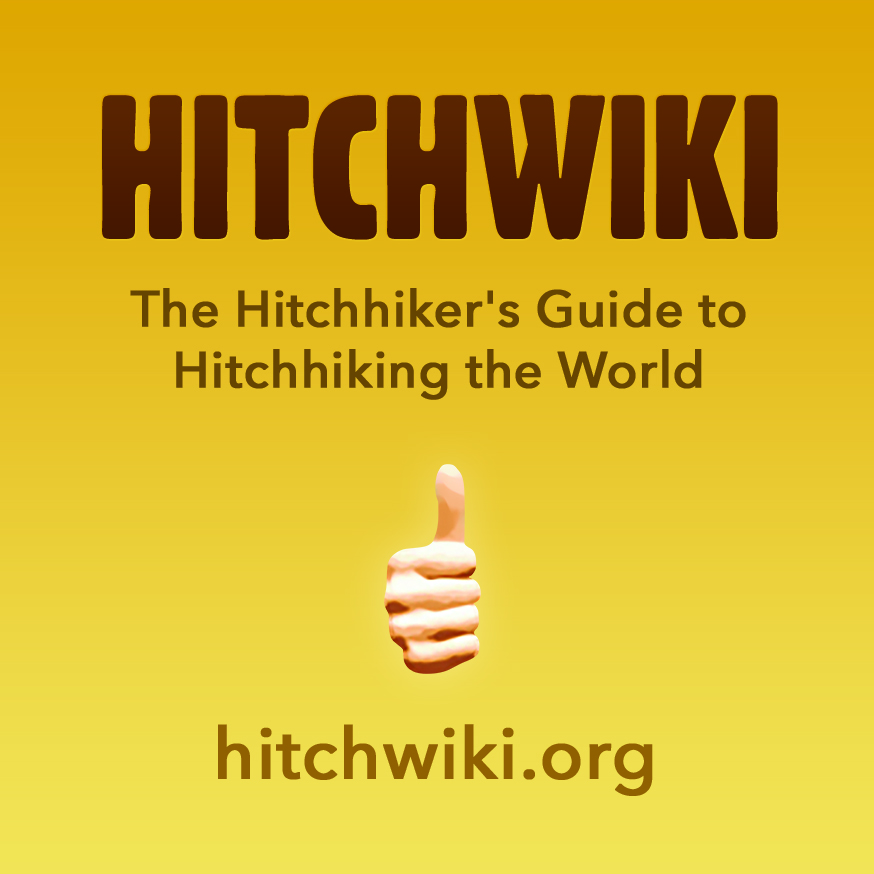 Not sure if this is the right place for me to ask, but I wonder if a sysop could help protect the page Hitchhiking a boat. There's a new account that appears to have joined Hitchwiki solely to remove any criticism of boat-finding website FindACrew.net and any mention of advantages to its competitor, Crewbay. Based on discussions on the talk page, the new user does not appear to be a hitchhiker, is ideologically opposed to travelers getting things for free, and has refused to wait for consensus to make changes. I have agreed to some of their more reasonable points, but they keep insisting on adding copious details of FindACrew's business model, and have also made surprising edits such as adding the company's slogan, adding a "TM" mark next to its name, and guilt-tripping readers for using a free service from a competitor. Any guidance or opinions are very welcome, but I suspect in the end this is just going to need to be treated as spam. Treefrog (talk) 05:40, 17 June 2020 (UTC)

I found no other place with article wishes, shall we have a list here?

Content not related to hitchhiking is being moved to Nomadwiki, see marked content to migrate. Vilnius, Barcelona and probably others currently have doubled content. If no one opposes i will remove it. --Traumschule (talk) 22:22, 4 October 2017 (UTC)

Vilnius: I do not know why this information about wifi and public transport has been removed, but I bring them back - I have come in handy, maybe someone will come in handy too --Leburaque (talk)

Yup, I understand the approach.
From my point of view, getting to and from places in big cities to where the hitchhiking is meaningful, for example, some specific places on the route is usually unfeasible without the use of public transport. Not only me but also the hitchhiker community I attend is usually interested in this fact and for example the overall price needed to drive from place A to place B with/withouth public transportation.
I can not argue with the general rules... after migration, especially since I'm not sure if all elements work as they should (for example, I had a problem with the editing interface). I just thought it was automatically deleted for some IT reason. :)

There is probably no rule on that, it's a decision that has to be made by the community. If you say, you want the info there, it will stay, until someone has a better idea. Merging info is quite time consuming, so I prefer to have one designated spot, everyone agrees one, instead of half-updated content on both sides.
There are several travel wikis (wikivoyage, wikitravel, ...), but nomadwiki is one of the most free ones, so I like to improve it a bit. At some day everything shall be shown in a nice interface on trustroots as I understood, until then it would be great to have the info sorted. I try to improve the interface (forms and navigation), but they are easy to break (for example with unclosed brackets ...).
For public transport I am not decided myself, as some good spots are hard to reach without (for example Wroclaw has a lot of bus info intertwined with hitching tips).
Would it be ok to have a prominent link to nomadwiki at the end of the article to reach non-hitchhiking related info, or is that too uncomfortable? Ok, i see that public transport is useful for hitchhiking, but ... need to think about it :) --Traumschule (talk) 06:06, 3 October 2017 (UTC)

I think User:Guaka is behind a number of these wikis, so I'm pinging him (I think that works) for this conversation. I'm not sure what the reason was initially for spreading this information out over several wikis, but I wonder if it wouldn't make more sense to combine these - that is, to have one article on a place, and then have a hitchhiking section, a sleep section, a trash section, etc. I feel like that would be more useful, make information easier to find, and make it easier to maintain. -- Irningston (talk) 18:10, 7 October 2017 (UTC)

The original idea was to foster the culture of free sharing (about sharewiki) and nomadism (about nomadwiki) and still is. Also there is couchwiki with more doubled content. The idea was to sort info into forms for cities and countries (to use it on trustroots for example). A new version for this platform is being developed, so all content not related to hitchhiking should be stored somewhere else, see the "news"? --Traumschule (talk) 19:29, 8 October 2017 (UTC)

Although this has been a long standing issue I am a fan of the old <map ... feature in articles which is not enabled currently. --Traumschule (talk) 05:16, 6 September 2017 (UTC)

Sign for a motorway ramp, where is no onramp

A lot of motorways have junctions, where an onramp doesn't exist. I created these signs and ask, which of these is best qualified to understand, that there is no onramp in this direction? --GeorgDerReisende (talk) 18:26, 15 October 2015 (CEST)

The left one. --Fverhart (talk) 19:26, 15 October 2015 (CEST)
I was not aware what onramp means, looked for a glossary but found none, so I started the page. The explanation (entrance) was on Highway. I guess by junction you mean Slip road and suggest

I was reading some topics on the forum squattheplanet.com and saw that they have some kind of discussion over people that you might meet when traveling around and why is good to avoid them. Some are just because they lie to you or simply because they are annoying but others are there for reasons more serious as stealing all your stuff, violent behavior or even rape. When I saw it the first time, I thought of it as a good idea and something that to my knowledge is not around for other countries (the forum is mainly about US travelers). Im thinking that HW is such a popular website that could host some sort of list of sketchy people and hopefully minimize incidents on fellow travelers that visit this site.

I know its quite a challenge to decide when someone's comments are good enough to be trusted. So that is why I come here and propose this idea, to maybe start talking about a way in which people can start reporting on other people' s behavior (or even places, events, etc) and that this can be transmitted to other travelers.

Sorry, such a list would be totally illegal in Germany (where Hitchwiki is hosted & legally based) as well in other European countries. Dangerous/illegal stuff should anyway be reported to local police. Let's concentrate building better peer review / reference systems on BeWelcome and Trustroots. Feel free also to improve "Awareness" section under Safety. Thanks for suggesting tho! -Mikael (talk) 19:57, 2 March 2015 (CET)

You found a bug?

Fixed: Can we have the dumps feature back, please?

Hitchwiki offers daily database dumps, but they are not there. Would be nice for offline use.

Map is read-only without tiles

In articles that have a short lead and an infobox, the Table of Contents messes up the formatting (see Sarajevo, for example). Is there a way to fix this? -- Irningston (talk) 15:38, 5 March 2017 (UTC)

Is it possible to merge page histories? I just copied and pasted the text from Nova gorica to Nova Gorica to have all the information in one place, but if we could merge the histories that would be much better for proper attribution. -- Irningston (talk) 17:48, 6 September 2015 (CEST)

There is Special:MergeHistory (manual). I just merged Nova gorica into Nova Gorica, however Nova gorica has newer edits, so not all revisions could be merged. One could try to merge the other way, remove the redirect and move Nova gorica to Nova Gorica afterwards. --Traumschule (talk) 13:44, 1 October 2017 (UTC)

I've reported this on Github on 3 July, PM'ed Guaka and Mikael, but nobody seems to care. There's another problem with the same result,
"Database error
A database query error has occurred. This may indicate a bug in the software." Prinoblog, talk 15:43, 22 August 2015 (CEST)

What is the best place for development related questions/bugs currently? I found GitHub and google group, but they seem to be inactive for at least half a year.--alexy (talk) 17:11, 14 December 2015 (CET)

Would it be possible to create a link from a user's contributions page directly to that user's User and User_talk pages? -- Irningston (talk) 23:58, 21 August 2015 (CEST)

Thanks for your reply! I'm currently working as a member of Pywikibot team on making Pywikibot support OAuth. Pywikibot team would be very happy to run OAuth regression tests for Hitchwiki once it has OAuth working. (We could also offer help to set it up) --VcamX (talk) 17:50, 7 August 2015 (CEST)

Marked to be move to the archive.

I'm working on a script to convert MediaWiki dumps into an app. There's now an Android app for Hitchwiki. It's really alpha and not very usable yet. Your bug request and feature requests are very welcome. guaka (talk) 21:39, 14 March 2013 (CET)