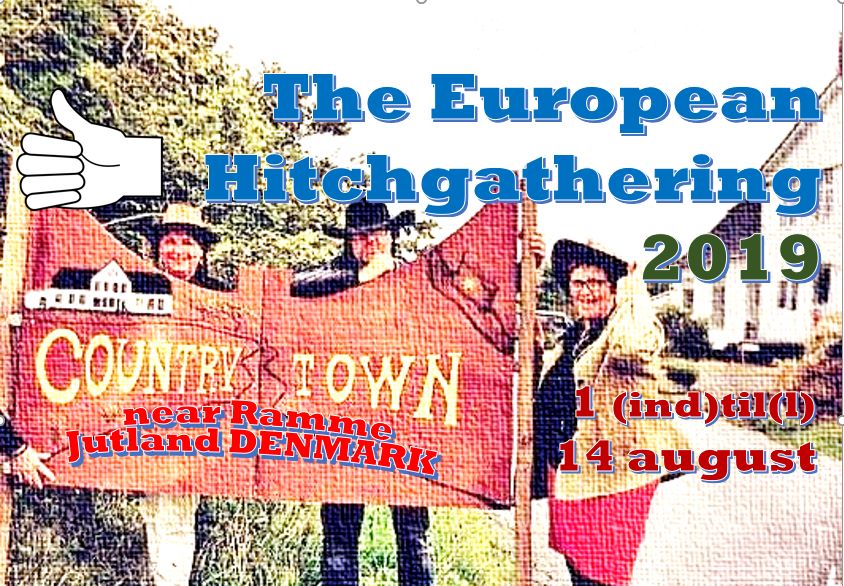 Some years ago, a woman called Lisbeth accidentally bought an entire village in western Denmark. She made it into a country town and announced herself the sheriff. She is the only one living there, but various groups of people show up for visits in the village every summer. We are invited! The danish hitchhikers have been visiting a couple of times, I joined too, once, and we had a really good time. The Sheriff herself believes in letting things run on their own and let the country town be as the people that are inhabiting it at the moment. It is a ghost town playground with lots of room for creativity. Improvements of the place in any sense are welcome. Sheriff Lisbeth was a hitchhiker herself and enjoys both road stories and live music. She has one plea, if we are going to have the hitchgathering in country town; that we don't ask her for permission and directions, but figure it out ourselves - it's the wild west! I told her that's how it always is anyways. It would also be nice, if we can help making the place better when we're there. There is a saloon with a bar and a lot of rooms upstairs. We can use the saloon if it rains and the bar is a great place to hang out. It's also a ghost town bar, so it's just the building, we will have to bring our own beer. Otherwise, there's lots of room for tents and we can make fire pits wherever we want. There's drinking water in the saloon. Dumbsterdiving was good the last time I was around, but 10-20 km away, meaning you would have to hitchhike to get there. Sheriff Lisbeth really hopes that if we come, we can hold a big western party one night.

From Bunec Beach (about 20km north of Sarande).

Walk down to the beach. Walk north along the beach from there. There is are 2 Beach bars. If the bars are closed you have to to cross about 3m through water. After the last bar walk about 5 min fuether. There is a arrow of stones pointing to spot where you can get up to the camping spot. It's a bit of a climb. Up there just follow the path till you see tents.

From Borsh Beach: Walk about 45minutes south. There is a arrow of stones pointing to a water source and the spot where you can get up to the camping spot. It's a bit of a climb. Up there just follow the path south till you see tents.

By today our number dropped to 4 so we might join the Rainbow Gathering that's in walking distance. If we do so we'll leave directions for the other place.

for about 30 years there has existed a squat called La Borie. Situated in the heart of the Cevennes with lots of forest and a beautiful river and many nice and colourful people coming through all the time. Now the commune (municipality) of St Jean du Gard who legally (pfff) owns the land has apparently finally gotten their shit together to evict the place and to make something else out of it that involves private property and profits and liability and insurance and most essentially of all wearing swimming shorts while dipping into the river... the eviction date is July 9, and not coincidentally at all La Borie invites you and all of your friends and all of their friends etc. for a Semaine du Camping Ecolo Gratuit -- a week of free ecological camping -- beginning from July 9. There will be plenty of music and dumpsterdived food and nice people to dip in the river with and maybe some riot cops with home-made cakes. (If you're worried about police exposure, you can very much still come in support and get out of the way before things heat up too much.) So if you're in the area or if you don't have anything better planned for this week, I very much recommend that you consider dropping by :-)

Kesselberg near Berlin - End of July

Everybody is invited to come to Kesselberg towards the end of July (or any other time really). We have: A lot of forest, very nice swimming, abundant dumpsters, and an anarchist village if you want to already experience the future first-hand ;-) Just ask for Carlos.

Since it looks like the main gathering in Denmark is save, I'm gonna propose a little pregathering in Belgium, right next to the German border and only a glimpse away from the Netherlands and Luxembourg! So it's perfectly on the way for travellers coming from the warmer, western parts of Europe!

The venue is an abandoned camping ground with lots of caravans, so it's already a little taste for the empty country town in Denmark! It's also right next to a river and the well known Fenn cycle path.

At the farm where we had last year's gathering, Western Serbia.

In what seems to be(come) a tradition some brave hitchhikers will hitchhike up to the arctic circle to enjoy darkness, a frozen world and northern lights.

The rough plans so far:

Unfortunately, the old mailinglist is down and it doesn't look like it will come back (http://lists.freeactive.net/listinfo.cgi/hitch-freeactive.net).