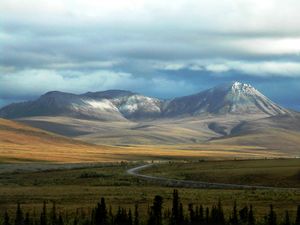 You can find rides easily on the Dempster intersection - the intersection of Alaska Highway and Dempster Highway. There is a service area right at this intersection. The service area has a restaurant and a gas station and most rides going north stop there. Just ask around, and somebody will offer you a ride. If you have to spend a night or two, there is a camping ground there too.

Dempster Highway is around a 750 km ride with just two major stops in between - Eagle Plains and Fort McPherson. Most rides are going all the way to either Inuvik or Fort McPherson. Many people also just head to Tombstone National Park. Either way, there are hardly any chances you will be left in the middle of nowhere. Just ask around where ever you are, and Dempster should be an easy path to hitchhike.