Difference between revisions of "User:Gutuater"

File:HHBergen.JPG
Hitching under the rain from Bergen to Førde, Norway

He's fluent in Italian (native), English, German, and Norwegian. Less fluent in Spanish, Portuguese, French, Icelandic, Danish and Swedish. Can survive a basic conversation in Faroese and Dutch. He's desperately waiting for the right moment to learn a Slavic language. The best conversation was while hitching with a Faroese shepherd, speaking a mixture of Faroese, Icelandic, Danish and English.

His plans are yet not fully clear. He left Iceland in October 2009 and is still hitting his head against a wall asking himself why. After vagabonding in Denmark and Sweden, a 3-weeks parenthesis in Japan, he now temporarily relocated to Voss, Norway for a short-term job in a hostel. An updated list of his future movements is to be found on his CouchSurfing profile, section "Couch Description".

He most certainly is coming to the next Hitchgathering in Portugal! 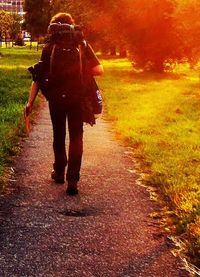 Hitching in the Netherlands