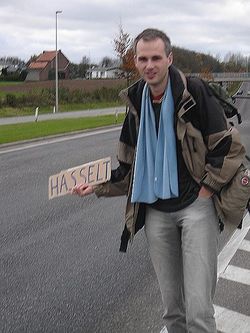 Hitchhiking is my favourite way of travelling, which I practice when I have time: during weekends and in holidays. It is a very interesting way to be in touch with people and also a more environmentally aware and economic way of travelling fast than going in your own vehicle or by public transport. Anyway as far as travelling is concerned I also enjoy to move myself on foot, on bike, on iceskate, by public transport and only occasionally in my Citroen AX (that is usually with friends, and it is practical (or simply lazy) to do some bigger shopping once in a while by car).