Minsk (Belarusian: Менск IPA: [mʲinsk]; Russian: Минск; IPA: [mʲinsk]) is the capital and the largest city in Belarus, situated on the Svislač and Niamiha rivers. As a capital, Minsk has a special administrative status in Belarus and is also the administrative centre of Minsk voblasć (province) and Minsk rajon (district). It has a population of 1,982,444 inhabitants (2018). Urban area that includes about thirty satellite towns reaches 3,000.000. 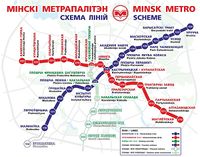 Blackriding in overground transport is possible. Although ticket inspectors don't wear uniform you can recognise them as they usually work in a group of 2 or 3, wear a portable video recorder and a badge with name and photo on the chest. So if you notice inspectors standing at the bus stop, just get off. They won't do anything to you.