Hitchhiking (also called lifting or thumbing or in parts of Europe, auto-stopping) is a form of transport, in which the traveller tries to get a lift (ride) from another traveller, usually a car or truck driver. This wiki contains a lot of information about hitchhiking: where to start, practical info on how to do it, pictures and much much more. If you've never hitchhiked before and you want to try it out you should check out the article hitchhiking for the first time. 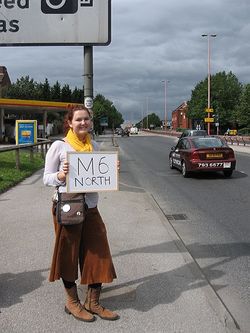