Difference between revisions of "History of hitchhiking"

The history of hitchhiking might be as old as the invention of the wheel. 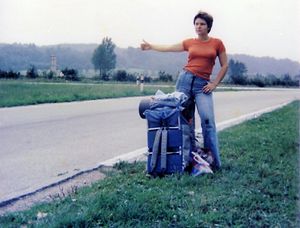 In the 1970s hitchhiking was much more popular in affluent countries than these days.

In the 1980s hitchhiking experienced a clear decline in affluent countries in Western Europe and North America, perhaps due to the selfish spirit of capitalism, or fear promoted through scaremongering from the media.

It remained relatively easy in the countries of Eastern Europe as fear of crime was much lower and a sharing spirit promoted neighbourliness. Rates of car ownership were lower than Western Europe a decade before.

In 2006 the domain name hitchwiki.org was registered. The wiki that was moved there had been started a bit before. In a couple of years the site grew to the biggest resource of hitchhiking information.