Difference between revisions of "Greece"

Contrary to belief, Greek drivers will rarely if ever ask for money. Because there are few motorways in Greece, the national roads become great havens of locals and long distance drivers pouring in from the south east to west and vice versa, up into the north. Greece can be a little slow because many greeks tend to seemingly be afraid of Albanians. It's best not to ask too much about it as something close to racism and prejudice comes out.

In Greece it is very hard to hitchhike using mainly petrol stations. The best way to get lifts is to hitch right on the highway. Cars are going to stop most definitely and the police usually doesn´t mind. Using the gasstations can cause long waiting hours since they are a litte off the highway and quite small for western criterias. Besides you can barely find any in the northern parts of Greece.

Greek supermarkets also often throw away a whole lot of food. Watch out for that. Fuel for the thumb. 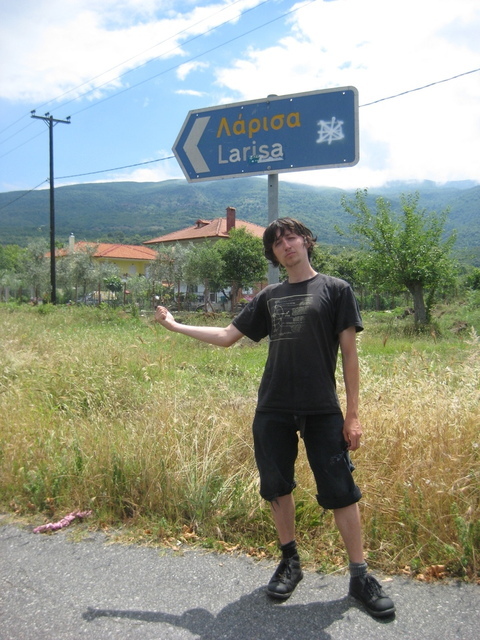 Jason hitching in Greece, June 2008. His hips have seemingly turned inside out.