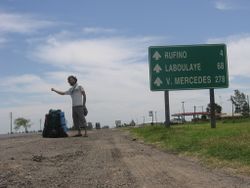 For hitchhikers Argentina can be divided into two parts. The north, which is pretty okay to hitchhike, and the south, which is a complete disaster, especially compared to its neighbour Chile.

map24 is in Portuguese but has information about the whole of South America. A normal map is pretty expensive, but there is a road map containing many countries of South America for something like 10 pesos.

In Argentina it´s normal to ask the people filling tanks at gas stations to ask people for you!

If you´re a foreigner, do mention it! As a Dutch guy it seems to be a lot easier to get rides.

Number plates are white, composed by three white letters and three white numbers, so if you´re in some other country and hitchhing to Argentina, look for these plates!

There are quite some peajes, or toll passages. In the south however, these are not so good, and you will just be sent away after a while.

About Argentina in General:

I disagree with the previous writer, not on the comparison with Chile, but i do disagree on the south traveling item. The south of Argentina may be difficult to hitchhike if you get into the lonely dirt roads of the Patagonia, because population is scarce. But if you travel southward to the end of Argentina, rides may be a little bit hard, but they will take you a long way along.

Patagonia has a single very crowded road, wich is the national nº 3. And some east-west roads, some dirt, some pavemente. It is easy to get a ride on the paved road. Dirt roads, however, and because of the lack of vehicles, is much harder.