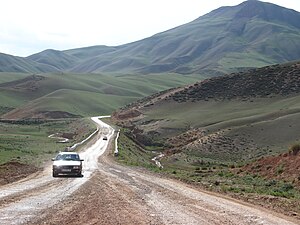 The Torugart Pass is the most important border crossing from Kyrgyzstan to China. It has a fantastic scenery and belongs to the network of the silk roads.

The Torugart Pass is opened only from 9h - 13h to cross from Kyrgyztan to China - and from 14h to 18h to cross from China to Kyrgyzstan. The pass is closed on weekends and holidays - also closed sometimes in winter. You have to pay to cross it, you have to be in an organizised travel group - private cars are mostly not allowed to pass. In some travel forums in the internet some people say that Torugart is now open for everyone - stay informed and update this information!

In winter the pass can be closed because of to much snow.

There is a bus from Bishkek via Artush to Kashgar traveling via Torugart Pass. You can book a ticket in Bishkek. With this bus you can pass.

Ticket office in the main hall of Bishkek's West (New) Bus Terminal where you can buy a ticket
Retrieved from "https://hitchwiki.org/en/index.php?title=Torugart_Pass&oldid=47264"
Categories: