Arriving at Union Stion in Downtown Denver a very good option going north is to walk to 20th street and stand on the side of the bridge over South Plate River to stop cars getting on I-25 North. September 2019 I got a ride after 30 minutes in the sun all the way to Downtown Boulder from there. There is another on-ramp accessible by foot from Denver Uniton Station: Walk to Speer Blvd and try your luck. September 2019 I stood there for 20 minutes and then gave up as cars have no good place to stop there. I then walked to the other in my opinion way better spot near 20th street. 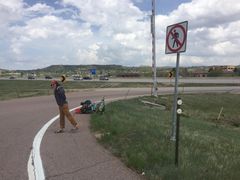 "Yeah I got dropped off in this truck stop past midnight. The trucker gave me his shower token and I washed off, then asked the workers which way to downtown - and both of them, this young girl and young guy, freaked and were like "Do nooot go walkin in this neighborhood at night!" and I was like "Cmon guys can't be that bad." They were tellin me about all the shady people, and me being dumb, thinkin I was all tough after homelessing around South Central LA and stuff, go walkin. The people are shady sure but, in those bad no-cop neighborhoods, people let their dogs wander around like in small-towns, but these are city dogs. Anyway, anywhere downtown is fine. Anywho I love, love, love Denver, it's my soul's home, I stop by Denver every time I travel"