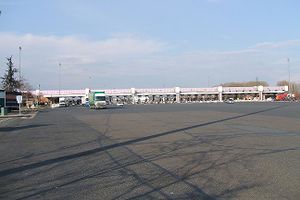 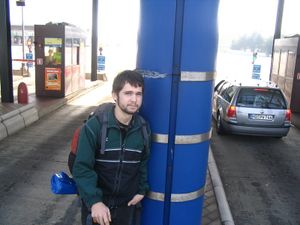 Derek hitchhiking at a barrière de péage near Valence Clare rockin' a péage in Croatia

Péage is a French word for toll road in France and other countries where French is spoken, such as Morocco. Don't mix up the word with autoroute which means "motorway" in French and is not necessarily a toll road. Hitchhikers usually use this word as refering to toll stations.

In France, most of the motorways are toll roads which are the fastest way to hitch across the country. There are two types of toll stations on péages. First, there are big ones where all traffic has to stop to pay a fee (or to get a ticket) – these are barrières de péage and usually they are excellent spots to get a long-distance ride. They are often located near big cities on the autoroute. Another type is a side barrier situated on all exits in the toll part of the motorway. On latter ones traffic is much smaller, therefore one can expect a longer waiting time, although sometimes congested toll stations (the first type) can be a difficult place to hitch from, too, as drivers have to pay a lot of attention to not cause any accidents. Then again, the more cars, the more possible rides, if you manage to show your sign to as many people as possible. Often they will not stop in the péage, but indicate that they are going to pull over just after it.

To reach the barrière de péage, you may need to walk along the motorway; with a help of a proper map check if the distance needed to be walked is not too long. It is actually illegal to walk on a side lane of the motorway (same is valid for some parts of national roads (voie express) in France); if police sees you, you will be driven somewhere safe and may be fined for ~90€. Péage toll stations are considered a part of the motorway, and legally you do not have the right to solicit rides there. You may be asked to wait in the parking area which is after each barrière de péage. In practice, this is rarely enforced (maybe 5% of the time), most toll station employees simply want to make sure you're not endangering yourself or others. Having a sign with your destination (or the next city) is recommended and will distinguish you as a serious hitchhiker, and not a vagrant.

The fastest way to travel on a péage is from one barrière de péage to another. Hitchhiking options are:

Some barrière de péage are really good, some are not. If you've been waiting for a while using a destination sign, drop it, make a new one or try thumbing.

While on a toll road, you can always try hitchhiking from one petrol station to another, either asking drivers while they refill, or thumbing at the exit of the service area. The staff usually doesn't mind hitchhikers.