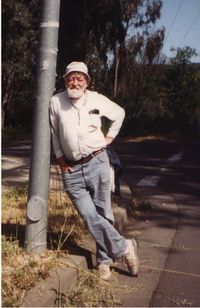 Irv Thomas did his hitch-hiking across a span of sixty-six years, his last such venture being a leisurely five-day journey along the Oregon coast at the age of 82, in June, 2009 (starting from Chehalis, WA, ending in Eureka, CA). His early road trips were in the 1940s, and then he rediscovered the utility and the adventure of it when he gave up the automobile in 1971. The late-life re-engagement with the open road of the open thumb quickly revealed itself to Irv as a rewarding avenue toward a whole new range of self-realization, and a deeper view of reality. He tried to capture this in his writing, and much of it is available in a 2004 book titled Derelict Days... Sixty Years on the Roadside Path to Enlightenment. The library reference work, Who's Who in America carries a short biography of Irv with the indication that hitch-hiking is his avocation of choice. You'll find his personal web site at www.irvthomas.com.