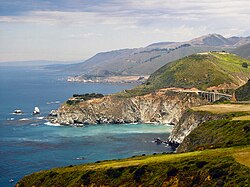 Big Sur is a sparsely populated region of the Central Coast of California where the Santa Lucia Mountains rise abruptly from the Pacific Ocean. The name "Big Sur" is derived from the original Spanish-language "el sur grande", meaning "the big south", or from "el país grande del sur", "the big country of the south", referring to its location south of the Monterey Peninsula. The terrain offers stunning views, making Big Sur a popular tourist destination.

Highway 1 is a two lane highway for the entirety of Big Sur. It is very windy, with cliff faces on the west and frequent pull outs. Hitching is best done in front of one of the many LONG dirt pullouts or on the edge of one of the many small towns in the area. (there are many smaller ones).

The locals here are friendly to hitchhiker's and there are many transient residents of Big Sur who hitch everywhere. They are pretty much your only hope, that and the occasional surfer or hippie.

Don't expect to get a ride from one of the innumerable sports rental cars that tourists frequently drive down this famous stretch of highway. Although it has been reported that a small percentage of highly affluent folks have been known to be inspired, by the stunning beauty of the area, to pick up poor travelers and smoke a joint with them.

And those colorfully painted GMC vans that seem like a sure thing are imposters. Some damn rental company.

So you have to find a ride back north to Monterey and then to bring you on the 101 or find someone who will drive all the small roads crossing the Big Sur State Park.

Gorda, Ragged Point, Lucia, and Big Sur are so exorbitantly over-priced that the economically-minded traveler would do best to buy ALL supplies in either Morro Bay in the South or Monterey in the North. No exceptions. A beer is $7. A bar of chocolate is $4. A cup of terrible coffee is $3.50 and a jar of peanut butter is $10. Gas was $7.00 a gallon last time I passed through.

Camp for free on one of the innumerable pull-outs along the side of the highway. Or climb one of the steep trails into the mountains for secluded camping with amazing views. If you pay to camp in Big Sur you are not looking around you.

Esalen Institute accepts volunteers by reservation only. So don't expect to show up there and get a volunteer job right away. You gotta call beforehand.