Arnhem is a city in the East of the Netherlands. It is the capital of the province of Gelderland. Hitchhiking out of this city is fairly average. Use caution when choosing a hitchhiking spot in Arnhem. In 2006 a petrol station at the IJsseloordweg, located short before the junction of A12 and A348, was closed down for 6 months, to be reconstructed and reopened late 2006. 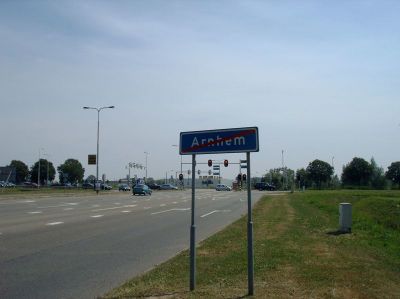 Arnhem - a hitch too far?

Especially watch out for the IJsseloordweg. There is a petrol station marked as a hitchhiking spot on Liftershalte, Hitchhiking in the Netherlands, Autostop Guide to Europe (plus maybe other sources) that no longer exists (as of May 2007).

This is on the N325 (IJsseloordweg) leading out of Arnhem onto the A12-A348 motorway junction. Google Maps still shows a satellite image of a petrol station, but as of summer 2006 the petrol station had been removed and only a Texaco sign on a bare concrete concourse remained.

TomTalk was taken from Utrecht to this position, as according to the driver it was "a petrol station which drivers know about". Sadly, there is almost no hard shoulder for cars to stop for a hitchhiker, and Arnhem city centre is about 60-80 minutes' walk away. There are some hitchhiking opportunities whilst on the walk back to the city centre, but they are few and far between.

Additionally, the hitchhiker noticed a high proportion of old drivers, over 60 years of age, probably due to the city's war history. There was also a high proportion of gangs of youths showing off their modified saloon cars. Certainly no-one was interested in giving a lift, and definitely not over the German border. Any attempts were met with sour looks from the pensioners, and middle fingers from the youths.

If you are stuck at this spot (or at any other hitchhiking spot in Arnhem) whilst travelling to Germany, then it may be worth accepting a lift to Nijmegen (very close to the border), and negotiating with the driver to make a short diversion and take you over the border. The roads on the German side of the border are secondary roads, but seem to be fairly effective for hitchhiking. See Nijmegen.