Hitching in Tibet can be somewhat challenging to say the least, besides being a limited number of roads and motor vehicles it's illegal and most major routes across the country are manned at checkpoints by Chinese military police. Needless to say Tibet is a wonderful place to travel around and most definitely worth a little perseverance.

Tourism and Transport in Tibet

The majority of vehicles in Tibet are the luxury 4x4 Jeeps trekking back and forth along the road between Lhasa and Kathmandu. Travel in Tibet autonomous region is limited by the Chinese government, they like to know who is in the region, where they are and what they are up to. Just getting up to the Tibetan plateau requires a permit which is only given to tour operators for their customers. It is these tour groups that run the main road through the region sticking to their tight itineraries. For these reasons trying to stop a tour company Jeep while on the plateau at the roadside is near impossible, if the company would get caught carrying foreign travelers without having permits for them they would face hefty consequences. This is similar for any company found letting their customers 'leave' the tour while still in the Tibet region.

It is important to remember however that often these tour operators couldn't care less who you are or where you're going... often the smell of a quick dollar can make the difference between the night in the dust at freezing temperatures along a deserted quarry track and an air con ride to the nearest bunk.

The Nepal side: Access into Tibet from the Nepal border is impossible, it is a strict border post high in the mountains leaving very few options from this side as to getting into Tibet. Paying a package tour to get you across the border is an expensive option but may be worth a try, and you still face the problem then of leaving the tour group for independent travel. Nevertheless this is quite possible for the determined.

The Chinese side: Similarly, up until recently the situation from the Chinese side was limited to a flight into Lhasa under supervision of a tour group. All road access into the region was and still is well out of bounds for foreign travelers and roads are constantly dotted with checkpoints, as well as military police carrying out random stop and search.

This seems more than a minor glitch in any plans of traveling in the region. However, it was not impossible to find one of many of the 'tour' companies selling guided tours, consisting of nothing more than a permit stamp in the passport and a taxi to the airport. Once on the plane it was up to you to talk your way off the other side.

These days the Chinese are slightly more relaxed with people visiting the Tibetan capital, Lhasa. The Xinghua railway provides access to the area yet visitors are still supposed to be under the supervision of tour operators and still require permits to enter. Permits can often be purchased from 'tour' operators with no interest in actually providing a tour. Don't be fooled, the Chinese government are aware of this but remain happy with visitors being contained to Lhasa. Food, accommodation, and attractions are easy to find in the capital and it has become very much a tourist hub. 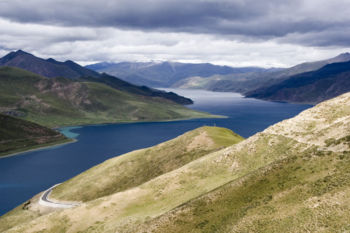 The next and hardest problem of Tibet is getting out of Lhasa itself. It is here the clamp has come down, there are few local buses running out of the city and travel on these is illegal, most will refuse you the ticket! Travel by private car is very limited, checkpoints out of the city put hold to any unsupervised travel.

The best option is the 'pilgrim buses' often free of charge. These buses that trek out of the capital at ridiculous hours of the morning towards the surrounding monasteries with hoards of local monks, pilgrims and traders. It is here you meet the real people of Tibet, often the Tibetans are happy to see you exploring their country and welcome you with open arms, getting off these buses at one of the monasteries is often the start of a great adventure. It is from these places, or from being dropped at your request in a passing hamlet, that you can find tractors traveling up to mountain top monasteries rarely visited by tourists, quarry trucks of miners heading deep into the mountains for weeks of work at a time or boats setting along the river bringing in and out fresh veg from surrounding villages. Be warned, the big monasteries all contain police outposts that do check you out!! Keep your head down and think about where you're heading. Once on the road it becomes a glorious freedom... you begin to depend on the one truck a day/s that drives the routes between hamlets. Time becomes a concept of light and dark and you find yourself living the life of a sworn monk in the remotest of temples high in the mountains.