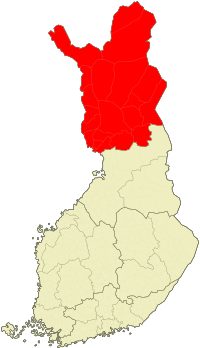 Lapland (Finnish Lappi) is the northernmost region of Finland.

Lapland is very popular among tourists for its beautiful nature and ski resorts. Because the region draws so many tourists, it is also slightly more expensive than southern Finland. Lapland is also reachable by trains or buses.

Only 184 000 people live in this area, so there are relatively few cars and highways if one compares it to central Europe. The further north you go, the fewer cars are on the road. However, hitchhiking to North Cape through Lapland is quite possible and draws many hitchhikers each season. People there are used to driving long distances and generally have a positive attitude towards hitchhikers.

There are many cars on the E75/A4 though, which is the closest you can get to a main road in Finland and which starts from Helsinki and goes all the way to the northern border of Finnland. The E75/A4 goes through many cities and is therefore good for hitchhiking. It is even possible to get from Helsinki to Rovaniemi (which is the capital of Lapland) in a day. To be on the safe side, it is best to count with a day and a half though.

In Finland mosquitoes are a considerable problem in the summer (breeding season is June-July), and especially in Lapland. Reliable insect repellent or a net hat/clothing is highly recommended, especially given the long waiting times in the region.

The little-used road from Ivalo to Murmansk allows you to cross into Russia, providing you hold the necessary paperwork. It's mostly rich Russian driving this route, and they don't tend to stop for strangers on the side of the road abroad. It's best to get to the big S Market in Ivalo, where they go shopping, and ask around the Russian plated cars. They might find it surprising that you're heading to Murmansk, but that's your chance of getting a ride.