Gent is a city in Belgium.

Take the tram 4 in the city center towards Moscou and get off at A(dolf) van Ooteghemstraat, which is 1 stop before the tram reaches it's end station. Walk left into the Walstraat and then the first street to the right into the de naeyerdreef (sand road with lot's of trees). At the end of the road you'll reach the entrance to the A14 (E17) where you can easily get a ride towards Antwerpen or Kortrijk. You can also take tram 2 towards Melle Leeuw and get off at Gentbrugge P&R. That is almost right on the spot where you can start hitchhiking. You can stand under the bridge if it is raining. There are two gas stations on the A14 (E17) before Antwerpen. 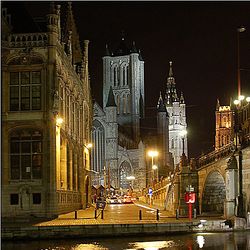 Take tram number 2 or walk from the center it takes 30mins, when you arrive the tram station you will see the bridge which is highway E17 (A 14) goes to Antwerp. Walk through under the bridge follow the N9 motorway few minutes and you see the high way enter on the right hand side. There is a long gap that you can easily hitchhike. Take a cartoon written Antwerp

Alternative with bus to reach the highway gas station: (January 2023): Take bus 78 from for instance Gent - Dampoort to Lokeren Nieuwe Dreef and walk for about an hour (nearly 5 km) to the Total energies service station on E17. I haven't tested this myself - It was particularly difficult to buy a ticket online from DeLijn, but according to Google maps and OSM it looks very possible.

Walk or take the bus 18 to the "Gent Malemstraat" stop. The bus stop is a good place to show a sign "Brugge" or "Oostende". The road leads to the E40 motorway, actually to more directions than northwest too, but most of the cars take this exit of the city to go towards northwest.