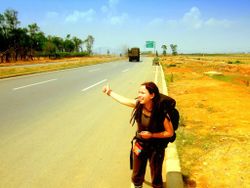 Zhangjiajie is a city in Hunan province and also the name of a national parc. The name Zhangjiajie will mostly refer to this national park. Near the city, you also have the Tianmen mountain, also treally touristic.

This parc is a really beautiful place that inspired James Cameron for the movie Avatar. This place is rather really touristic. The best time of the year to go there, is between september and November. It's not too cold, not too hot. Just avoid Chinese national holiday where there is usually much more people than usually.