The weather is an important factor to keep in mind when hitchhiking. 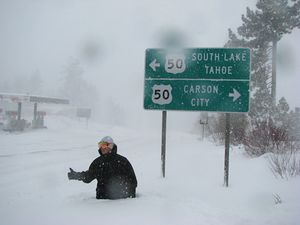 Hitchhiking during strong rain is not very nice, especially when there is a strong wind as well. During light rain hitchhiking is still very doable with just an umbrella to keep you dry. It also catches the attention of drivers.

A general advice is to hitchhike with an umbrella in case of rain. It keeps you dry for a long time. On petrol stations it remains easy to approach drivers to request rides. Statistics say that in the Netherlands - a country generally known for "frequent rain and wetness" - rain is falling 4% of the time. In general people highly exagerate the badness of weather - perhaps just a way to explain themselves why they wish to drive as much as possible by car.

On motorways during rain it is mostly a matter of going from one petrol station to the next and waiting and requesting rides under the roof of the petrol station. Only a strong wind could still make one wet.

Some have also reported that lightning can actually work in your advantage. Be careful with trees though.

Hitchhiking during periods with snow cover is all right, provided you wear warm clothes. The visibility of hitchhikers increase during snow cover and drivers are generally more attentive. Take care not to stand on places where ice on the road is a potential danger. Hitchhiking in a curve could become easily very dangerous if a driver starts slipping. Take your responsibility in extreme weather conditions.

During cold winter periods or during warm periods in summer the difference in temperature inside cars and on the street becomes rather big. In summer this is mainly true in countries where many cars are equipped with air conditioning installations. On a longer distance this requires strongness from hitchhikers. During a whole day of hitchhiking - when one gets perhaps ten rides or even more - there is a constant change of temperature on the street and inside the cars. This rhythm might easily lead to a sore troath and coughing - especially when combined with (active or passive) smoking.

During very warm periods in summer, or in warm exotic countries, one should protect oneself against excessive heat from the sun. Sometimes a place in shadow is not available, and waiting times are not always reliable. A simple cap would help prevent from burning the neck. Also arms and legs can be vulnerable to the heat of the sun. Make sure to take enough water.

Be careful, because sometimes a wait of a few hours might be unavoidable, and during cold your fingers may (almost literally) freeze off. This is of course especially true if one gets stuck at night.