Difference between revisions of "User talk:Prino"

It was the only time that Guinness included a 24-hour hitch-hiking record. The current non-Guinness record is held by Pavel Trcala with 2,777 km, from Miami to Chicago on 1998-11-28/9, see the records page of the Vilniaus Autostopo Klubas for the details. Prino 14:05, 23 October 2008 (UTC)

As you are the only one I know who owns a world record realted to hitchhiking you might be interested to join the discussion I started: http://hitchwiki.org/en/Talk:Hitchhiking_World_Records --Quarim 07:33, 21 July 2010 (UTC)

Hi Robert, sorry cant really use hitchwiki talks but ill try my best. It make me feel really ashamed every time I open hitchwiki home page that there are plenty of languages, from chinese to hebrew to polish bulgarian and finnish and there is neither an article in italian. Id like to translate it from english according to my "schedule" havent any, and the fact that im continuosly traveling though without a regular internet connection nor personal device (depending on hosts or internet cafes). Simply i have no idea where to start to create a new language section, if i didnt get it wrong u as guaka are the main developers of this wiki (or at least the only ppl who wrote me when i started to contribute it as new user). so id ask ur help:) trying to spread hitchin culture also among italians that have no idea about english or cant really understand it. thanks Fede

I already changed the template, it would be nice if all "Hitching Out" etc strings could be changed in "Hitching out" etc, I've been doing it, CRCulver has also been doing it, this "Multiple Caps Heading" thing is just silly! Ditto for my other pet annoyances, gas/petrol and highway/motorway. -- Prino 17:16, 5 April 2011 (CEST)

Thanks for the cleanup. Let's try to open up for anons again this week, maybe there's something else we can try. Let's brainstorm on Hitchwiki:Spam. guaka 13:26, 1 May 2011 (CEST)

As for the cleanup, I hope I've not made any mistakes, the fuckwits made multiple edits and Special:RecentChanges only shows the last 50 by default.
And about looking after things, I'm currently locked up at Pfizer in Brussels, and sit behind a PC from about ~7:30 to ~23:30. I can keep an eye on things for the next 15 or so days, but I have plenty of other things to do... I have mixed feelings about opening it up for anons, if someone is really interested in hitchhiking, creating an account is very simple. Prino 13:51, 1 May 2011 (CEST)

As most Central Americans learn US English, they tend to say "gas" instead of "petrol". A European hitchhiker in the area will have to get used to that. Therefore, I don't think it's worthwhile to change "gas" to "petrol" on articles about Central America. CRCulver 23:39, 9 July 2011 (CEST)

links to motorways in your logs

Question about average speed in Germany

Hi Prino, first of all respect for your endurance on keeping logs! I was thinking about adding general average speeds for hitchhiking in Germany. Thus I wonder if your average speed of 114 km/h in Germany is just time in the cars, time on the road including waiting or door-to-door time. If it's the first one, do you have statistics about the latter two? Best regards --Kriechstrom 15:57, 1 February 2012 (CET)

It's pure driving speed, excluding all stops (toilets, meals, etc) and even traffic jams (when the traffic comes to a complete standstill for more than 5 minutes). If you want more details, please check out the input file for my programs on Yahoo! (link on my page). I have no plans to add statistics for time-on-the-road or door-to-door. Anyway, time-on-the-road is sort-of available in the "lift.h-h" output file. My ballpark distance-per-day figure for hitching in Germany is somewhere around 800 km. Prino 16:03, 1 February 2012 (CET)

Sitting in a hostel in Hong Kong with only a small netbook I am not motivated to play with your statistics program at the moment, but I still feel like messing around with numbers :)
I know that statistic-wise, this is complete bullshit, but if I combine your numbers with Franks, who has exactly the numbers that are missing in your log, I estimate that you had probably around 679 lifts in Germany and spent 353.08 hours in waiting in Germany :)
This comes to an average speed (driving + waiting) of 84.1 km/h -MrTweek 16:59, 1 February 2012 (CET)

Hi, thanks for the informations to you two. I'll try to figure something out for the Germany article. Best regards --Kriechstrom 19:43, 6 February 2012 (CET)

Thanks for your help and improvements. When I started editing, I tried the blockquote to, but I must have done something wrong, because it didn't work for me. That's when I came up with the ':' workaround ;-) --N0id (talk) 20:42, 1 December 2013 (CET)

I had downloaded the lot from Bernd's site in 1999, and only managed to find my copy after you started putting it on hitchwiki. I had done the <ul> to <blockquote> conversion myself, but most of the rest of the clean-up was done using the W3C validator. I also fond a few more typo's (I actually have two nearly new paper copies of the book!) and changed some of Bernd's changes, most notably his use of ' -- ' to &mdash;, as per the printed version. There are still issues, most notably some text needs to be smaller, and it would be nice to have forward/index/next options in each chapter. I've also changed some of the typographical conventions, ALL-UPPERCASE titles are not-done.
FWIW, I also have permission from Sylvain Viard to put his thesis (see my page) on hitchwiki, the multimania.fr site is gone. It is big (250K), and changing the internal links into Wikimedia format will be a huge pita. Prinoblog, talk 21:03, 1 December 2013 (CET)

This isn't related to the wiki, but still want to share with you Prino - why not here? Got two consecutive rides in Jaguars yesterday, while hitchhiking Vlijmen-Roermond! Never had any ride in Jags in my life as far as I am aware or as far as my ride registry tells, and then you get two in a row. Figuring out how I did that! Because when I find out, I'll be hitching Jags all the time! So now it's Porsche 2 vs Jag 2 vs Cadillac 1 vs Lomax 1

Hey Prino! I just reverted your last edit at A1_(Switzerland). Petrol stations should be at the same line only if they are directly opposite. Or at least I understand it like that. And btw you have awesome stats! --Kundrt (talk) 21:37, 28 June 2014 (UTC)

Not necessarily, if they are both between the same two exits, they can be put in the same row, see for example Auerland on the A2 in Germany. They are not opposite each other, but are in the same row. You can add a note, or better, create a page with crossable rest area's in Switzerland, and link it from Rest areas allowing cross-overs.
As for my stats, anyone who hitchhikes long enough and keeps track of their rides can generate the same. ;) Prinoblog, talk 22:23, 28 June 2014 (UTC)

Why did you change an editor's "'103€" to "EUR 103"? The latter is the normal way for native speakers to write these sums. The latter to me is a distinctly foreign custom. (I don't think it's worth linking to the EU's legislation on this matter, it has been criticized by speakers of many languages.) CRCulver (talk) 19:24, 3 November 2014 (UTC)

Hey! I know about svg and I try to use them as much as possible but now I was lazy to create redirects (for consistent names) at wikimedia commons. Or some kind of "province to image name" converter in a template could work... I might do it later. Kundrt (talk) 21:38, 25 November 2014 (UTC)

Hey Prino, how are you doing? Hope all is fine! I was just wondering, you added a personal blog post to the 'News' section of hitchwiki. Imho, your personal blog post does not really fit among the other items usually added to the news section (book releases, events, etc.). This might be an example case for other bloggers, and I wonder how the news section might get cluttered in the future if everyone would add his personal blog posts in the news section. We already got Blogging Hitchhikers for that. I'm hesitating to reverse the news item for now, and first wanted to give space for a short discussion.

One idea to solve this might be to add (HINT to the HW Hackathon dudes) a separate news section to the main page for blogs or personal articles (maybe some sort of aggregator as the planet we had back in the 00's, see Hitchhiking Planet), which could be automatically or manually updated by authors more frequently. What do you think?

Hey thanks, I guess that will be especially useful as I might volunteer more time to the wiki in the upcoming months. And I think I should give you 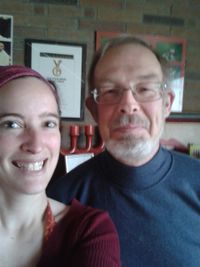