East Timor (officially the Democratic Republic of Timor-Leste) is a country in South-Eastern Asia, considered a part of Melanesia.

According to Lonely Planet it seems to be a known concept among locals and is used for short distances. You should give a tip, which should be like how much you would pay in a microlet (minibus). In the rain season some remote village can be not reachable because of flooded roads.

Hitchhiking is very easy and usual in Timor-Leste. The yellow trucks gave free rides to Timorese people and any hitchhikers. Just tell your destination and climb to the back. People who own a car usually speak portuguese or english, so you should manage to communicate more easily. Drivers are very curious and will always stop to ask you what you are doing and where you want to go. Most cars are pick-up trucks. So just swing your pack in the back, and if lucky and there's no space in the car, you'll be riding with the wind in your hair. Some taxis don't look like taxis. Better to make clear that you want to travel for free to avoid misunderstandings (but most of the time, they will answer "yes, of course"). In July 2017, the roads were in very bad conditions (not paved, holes, not large, curved) but in constructions... so it should be paved in the next years and be better. Be happy if you manage to do 150km in a whole day (it has been my maximum). Along less used roads (for me the last 20km to Com and the Southern coast) it is quite easy to flag down motorbikes. They are very keen to pick you up, about half the motorbikes that past me would give me a ride. (5/2018) Easy to hitchhike for 2 girls together, also for 1 guy alone. 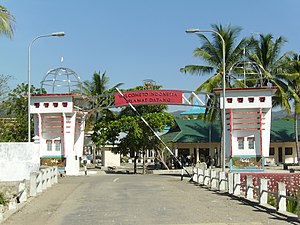 There is a open border crossing to Indonesia.

In July 2017, a microlet cost 50 cents. To go from Dili to Baucau, take a microlet to the bus terminal. From there, walk few meters away and start hitchhiking. It's not a good spot (because of all the people who would insist you to take a bus), but someone will stop quickly for you, no worries.

To Vale Beach (Jaco) or Hato-Builico... Be ready to hike because there is not much traffic. I walked 2:30 hours from Tutuala to Vale Beach, but some turists gave me a ride on the way back. From the highway to Hato-Builico, there are 18 km and it's going up. I got shorts rides and hike, it took me few hours.

From Timor-Leste to Indonesia When you arrive at the border, if you are European, they will stamp your passport with "one month visa exemption, not extendable". if you want to stay more than one month in Indonesia, ask to pay for a visa. They won't understand because you can have a free visa exemption. But explain that you want to pay a one month visa to be able later to extend your visa. A visa exemption can not be extended, only a visa !