Difference between revisions of "Svalbard and Jan Mayen Islands" 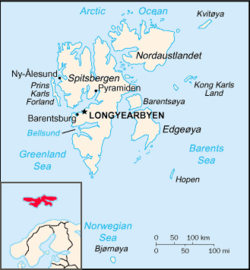 Svalbard and Jan Mayen are an extraterritorial part of Norway. The main airport is in Longyearbyen. Plan ahead for this trip as the climate and polar bear risk make it a destination not to be taken lightly. Still though it can be done reasonably cheap.

Svalbard has the approximate size of Ireland, but almost no roads. There are only a few settlements, of which the main one is Longyearbyen. Even there, roads are almost just within the town. The exception is the 6 kilometer road to the airport, where also the camping site is located (as a hitchhiker, you usually stay there). Don't bother with the expensive Skybus into town when you arrive, there are enough cars that you will have no trouble getting to town. But there is another, quite extraordinary possibility for hitchhiking: Go to the airport and ask the crews whether they can give you a lift. Not sure they will, but once it worked. See also: Hitchhiking a plane

It is apparently possible to camp in Longyearbyen for free in the summer months, however never camp outside the town unless you keep someone on polar bear watch 24h. In Longyearbyen there is one supermarket that is surprisingly large and well stocked. Prices are not unreasonable, with canned tomatoes/chickpeas/beans selling for around 1 euro each, and 1L of milk for around 3 euros (as of 2018). However, besides this one supermarket things are very expensive. Restaurants will be 50+ euros/meal, and the hotels are mostly 100+ euros/night. Equiptment rental is also very pricey.

Longyearbyen is serviced by SAS and Norwegian airlines, with flights from Oslo and Tromso. The price varies considerably over the year, but if you are flexible there are sometimes roundtrip fares for around 100 euros.

NOTE: It is common practice on the island for at least one person per group to carry a rifle when outside of the Longyearbyen 'Polar bear-free zone'. Rifles can be rented in town. Hiking without a rifle might result in a very expensive helicopter rescue.