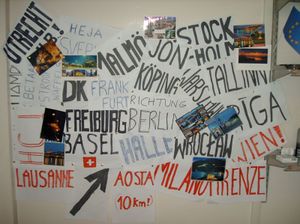 Hitchhikers often debate about whether to use a sign. If you decide to use one there are several important things:

Tip #1: Make a sign of a large sheet of brightly colored paper glued to a sheet of cardboard. Cover this with self adhesive transparent book wrap. Now you made yourself a re-usable sign wich you can use with a whiteboard marker and clean again with a small towel.

Tip #2: Make use of waterproof, dustproof document bags. There you can store many sheets of paper and signs you can reuse. Nothing falls out, you could hang them somewhere and you can use both sides of the folder to have two signs at once. Ortlieb is one company that produces good ones.

Tip #3: Buy a pad of A4 plain paper, and use it inside a waterproof, dustproof transparent plastic folder that you can find in most stationary shops. When writing, insert something under the page to stop the pen ink running through to the page underneath (a document bag is good for this). With a pad of paper, you can quickly flip through pages to find the sign you need. Also, the pad can be a great souvenir of your journey. 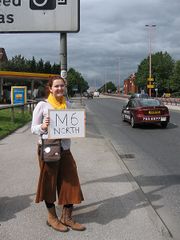 MayaCova using was using a white board with considerable success.

Tip #4: If you have a chance to plan a long hitchhiking trip in advance, some find using an erasable white board as a sign to be very useful for making big, clear and reusable signs. 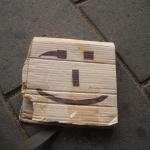 Even this can work great When not to use

Some hitchhikers think it could be better not to use signs at big crowded gas stations where it's up to you to ask people, like in the United Kingdom and Germany on highway gas stations (and speaking fluent English/German). It's not very likely that holding a sign will help if you can already clearly state where you want to go and that you are hitchhiking.

Others always have a sign. To show it to people while their still in the car and then ask them when they pass by to pay for their gas. If they don't understand what's written on it they also ask. And I already have it with me when getting out of a car, so people sometimes ask me right away if they can take me... So it's definitely good to have it. It doesn't have any negative effects so why not use it?

In conflict with the above, a sign only makes sense when you stand next to the road. At the petrol station you could better show the driver on a map where you want to go and so he can show you where he can take you. You even donât need to speak his language for that. The big problem with signs is that the driver must read it, then he must wonder if goes the same direction, than he wants to know if he likes your face and if he can stop somewhere...but than he realises that he passed you, he is now 500m away from you ...so he will decide to drive on! 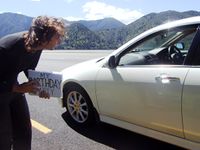 Sometimes you can use special signs

If you just use your thumb the driver only has to decide if he likes you and if he can stop his car in this place. If he is going the right way, you can find out when he stops. Another bad idea is the use of shortcuts, because only locals know them (like HH for Hamburg). Also, the driver can see your faraway destination city and although he doesn't want to go there, he could take you for the next 200km. Most drivers don't realise how helpful they could be with these 200km, so they drive on. I always have enough baggage with me. So I really donât need another square meter of waterproofed cardboard in my backpack. Use what you find and what you can put in the next garbage can! I only use sometimes funny signs or at some crossroads they could be helpful and when I am not the only hitchhiker who is standing next to the motorway. ...but it's like religion, everybody has his own idea of it!