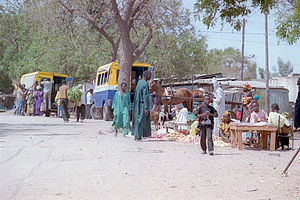 Senegal is a country in Western Africa. It is the most developed country in West Africa and has the best road network; most major roads are now paved. On those major roads, hitchhiking is very easily doable - there is a high number of private vehicles and the Senegalese are sympathetic towards the cause. Also there is a big expat French community which helps things. Drivers are very friendly and often you might find yourself invited to spend the night if evening is coming close. If you leave the main roads, things get a lot harder - be prepared to either wait or walk lots; most of your lifts will be short hops and most traffic will be taxies. Speaking a little bit of Wolof, which is the unofficial national language, will increase your popularity and your chances greatly. To leave the towns, there is only one way (with the possible exception of Dakar): Get to the end of the city by foot or mototaxi and hitch from there. When hitchhiking in Lower Casamance, be aware of the ongoing armed conflict there, it might be unwise to walk between towns on your own or even to accept ride offers of strangers. Check the situation before you set out. Finding rides at the many police checkpoints is also a great and easy way to hitch. Tell the officers where you are going and they will stop all vehicles and organise a free and safe ride for you.

The main border crossing between Senegal and Mauritania is Rosso, which is famous for its hustlers. After making it to Rosso (possibly you'll have to walk the short way from the road to Richard Toll because there's not that much at Rosso) you'll get your exit stamp, exchange money and then cross on the ferry to the Mauritanian side (free for foot passengers). If you want to hitch, ignore the numerous offers for taxis you will receive and walk out of town (around 1km) where (as of March 2011) there is a rotting donkey next to which hitching seems sensible. There is a second road further to the West going through the Diama national park. This is a dirt road with little traffic, most of which is coming from Mauritania anyway (overlanders wanting to avoid the hassle of Rosso).

Hitching towards Guinea is a very hard task. From Kedgougou, only 4x4s with very determined drivers are able to make it to Mali-ville (usually one every couple of days), and even though there is a new paved road being built from Upper Casamance to Koundara, it will be some time until it will be viable for most cars.

TonyPro says: I won't edit the main article because I only tried hitching a few times, but I found the claim that "hitchhiking is very easily doable" to be extremely optimistic. I spent 5 hours on the main road outside Kedougou with no luck, even though lots of private, half-empty vehicles passed me. Plus the locals had no qualms about queue-jumping, standing in front of me to flag rides for themselves. Then I faced another problem: I gave up and decided to flag down public transport, but buses and sept-place taxis fill up before leaving the towns, so if you are waiting on the edge of a city, they will always be full.