Saarbrücken is the capital of the German Bundesland Saarland, located right at the French Border. It's not really something you wanna visit, beneath lots of other German cities, there are no important monuments. It's a student City and it's a border city to France, that's the main reason why you wanna get there.

This following instructions according to Windsohn who has been living there for some time and hitchhiked quite a lot in and out are only helpful for you if you are used to the highway rest area hitchhiking style. If you prefer to stand at the highway entrances, that guide is not recommended. According to talk it's not always the fastest way, but the most secure way to always get here within reasonable time. 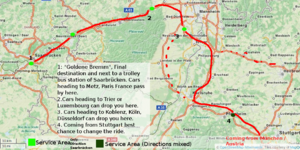 The service area Goldene Bremm on the A6 is the best spot to hitch near the city. You can reach the service area easily by taking bus 123 or 126 to Neue Bremm. Don't confuse it with the Autohof that's nearby, there is a proper highway gas station, too! Take a look at the schedule of the buses. Enter through the back doors of the buses if you don't want to pay, I have been living in Saarbrücken for two years and have never seen anyone controling tickets. Waiting time is 5-30 minutes when heading towards Metz, Paris, Strasbourg. You can catch a ride even to Spain or to Nuernberg, Dresden, Leipzig or even Poland. Zenit found the service station quite depressing to get rides towards Strasbourg and ended up settling for a ride towards Metz after spending the night and trying to get a ride for about five hours, changing directions at the Longeville service station.