In Romania payment for the ride is often expected, although foreigners often aren't asked for anything. People expect to be payed for giving a ride, but if you tell them in advance that you are unable to pay, 1 out of 2 will take you anyway. It is still cheaper than trains and buses though. The local currency is the Leu (pl. Lei). When hitchhiking, it's best to hold a sign with the name of the place you want to go. The most common method is using the 2-letter county code for the place you want to go.

Getting a ride can sometimes be difficult, as some of the cars that pass seem tiny, ancient and packed with more people than there are seats. This is probably due to the low rate of car ownership in some areas, and the fact that hitching is still a common way for locals to travel, particularly in the country.

It´s recommended to try hitchhiking right on the highway. For people from west Europe it might feel strange but it´s most defintetly the fastest way to get a lift.

Romanian is one of the few non-Slavic East-European languages. It uses the Latin script and is related with French, Italian, Spanish etc. Speakers of one of these languages will find it easier to pronounce and understand Romanian. 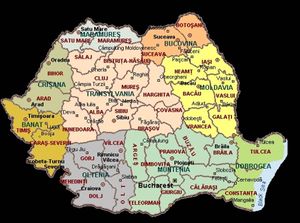