The best place are the petrol stations before and after the city if you come from outside the place.

take the bus 11 to the stade Route de Lorient you can't miss the stop 300m after you will see a first traffic light it's the entrance of ring road you can start hitchhike just after or the bus 54, 55 who are going a bit father, there also 3 service station before this road change into a highway 2km after a bus stop and a lot of traffic light, the first petrol station is probably the best spot as there is trafic light before and after people are going slowly.

Get to the J.F. Kennedy subway station (see map). Then walk along the Boulevard d'Anjou towards the Route de Saint-Brieuc. At the roundabout you'll find a perfect hitchhiking spot.

Take the metro towards the Henri Fréville station (see map) or bus 3 to Alma. There, walk down the Passage Henri Fréville for some meters towards a roundabout. Walk straight forward, over the highway bridge and there you'll find a good spot to head towards Nantes. Take a closer look at the map the the right to find out where exactly.

Take the metro to the last station La poterie and just walk to the roundabout, another option is to take the bus 62, 73, 75 to the town of Verne sur Seiche stop at La poste or Vern Eglise for the 62 and walk weast to the roundabout it the entrance of a small highway toward Angers. The bus 73 can even send you further to Corps Nuds but I've never been there, looking on googlemaps there should be at least two spot to hitchhike 2km south. 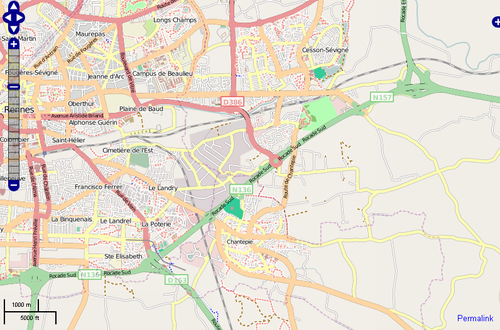 Anyway, it's a little bit complicated, no close toll, no petrol station near from at my knowledge... The goal is too find where the cars leaving from the center of Rennes to take the A81... GPS System propose them to take the "rue de Nantes" to go on the "rocade" and next A81 however we don't see spots on the maps, maybe there is a petrol station on that avenue, but this I'm not sure...

When I left Rennes it was in the night and I was hitchhiking on a big round-abount (yellow point from TerreHappy), ans I think it wasn't the best way... Find it :) !

IMPORTANT : On the sign put "Laval", because you can't put "Vitré" no petrol station and no toll before... Don't put like me "Le Mans" too far to leave that town ....

One spot which worked for me but still needs testing: Take the metro to the end station La Poterie. From here, it is about 1 km walking to the spot. Start walking on Rue de Vem to the south. To the left you will pass a huge parking place. Go past one roundabout, cross the bridge over the highway to get to the roundabout on the other side. From this roundabout, there is an exit going on the highway in the good direction, with a nice place for cars to stop. With a sign with Laval written on it, I got a ride in 15 minutes. --Smor 17:33, 28 October 2009 (UTC)