Difference between revisions of "Prague"

Writing a sign "PHA" clearly informs a driver that you are going to Prague, but a sign PRAHA works better.

From "Černý most", the last station of the B (yello) line of the metro, take a bus to the stop "Na Kovárně" (221, 303, 304, 344, 353, 398), it is about a 10-minute ride and probably you are going to a few euro, but not much. A hundred metres after the stop turn right and go along Tlustého street, after last house keep the right (bigger) road, then left before the cemetery. Go across the bridge to the petrol station. The walk is about 1.5 km total. There usually isn't very much traffic, but waiting times are likely to be short. If you get lost ask anyone about "Hummer Garden" (the place only for Hummers) which is just behind the station.

A possibly better choice is the K+R place near "Černý Most" metro station, which is popular with hitchhikers. Use a sign "HK" (Hradec Králové) or "PL" (if going to Náchod and Poland). It's necessary to use a sign, because the road splits in many directions.

Disadvantage is that there are only cars traveling out of Prague - not those going from Prague ring road. But there is no non-freeway solution to get a lift on those cars.

You can hitch from a petrol station on the E65. Take the metro line B (yellow) to the last station, Černý Most. From there catch bus number 220 to the stop Do Čertous. When you get off the bus, the petrol station is behind the big orange building with "H1" on it.

Another option is to use the K+R place near "Černý Most" metro station (the same for going to Hradec Králové); lots of hitchhikers use this place. Use a sign "MB" (Mladá Boleslav), "LB" (Liberec). It's necessary to use a sign, because the road splits in many directions. Because of building of Prague Ring (R1) sub-parts, long-distance traffic is lower each day, but this spot is still usable.

Warning: If you are passing through Dresden, take a look at the Dresden hitchwiki page. From either of the spots you can take rides to OMV petrol station before Lovosice or to the Agip petrol station after Ústí nad Labem. The hitchhiking positions there are also good.

Easily reachable OMV petrol station, not so many cars but almost anybody can take you 2 km to the second spot. From metro terminal station "Letňany" (red line C) take any bus or walk 500 m to the bus stop "Výstaviště Letňany". Behind bus stop at the crossroad turn left to the footway and after 300 m turn right to the small footpath going straight to the petrol station. The turn is just before the bridge over the highway.

First bigger petrol station (OMV) at D8. From metro terminal station ”Letňany” (red line C) take bus (195, 140, 158, 110, 269) to the stop “Obchodní centrum Čakovice”. Turn back (from bus direction), cross the roundabout and walk still straight another 800 m until you'll see the highway and petrol station will be on your left.

Most of drivers goes directly to Pilsen. But getting a lift to Germany or even further is not unusual. All petrol stations at 5 are fine for hitchhiking although often with little traffic.

Take metro B (yellow line) to "Hůrka", walk around Albert shop, upstairs and over small bridge. Walk around the school maintaining the same direction. You will see a wall that hides the road we need to take, so go behind it. There is a bus stop and a big road. Cross it and continue right to the crossroads, there go left. You will see signs "Plzeň". Go over the bridge and down to the left. After the turn there is great place for hitchhiking. Alight, long and lot of space to stop. Although it's not allowed to stay there, police don't make troubles there.

First petrol station behind Prague on 5 Fairly big one with McD's and enough cars. From metro "Zličín" (line B, yellow), take a bus 307, 308, 311, 380 or 602 to "Rudná, škola" stop. The ticket costs 18 Kč (~eur 0.66; 1 zone out of Prague). Once you get off, walk couple of meters in the direction the bus came from and turn left onto a street called "Na Přídělu". You should see the gas station in the distance. Walk to the end of the street, there will be a footpath towards the petrol station. You need the opposite direction so get to the other side of motorway by the tunnel at the end of closer petrol station. It's a 5-10 minutes walk in total.

From metro terminal station "Zličín" (yellow line B) go under the road and immediately left. Continue along the road for 150 m to crossroad with traffic lights. You can stand right on the triangle, down at the highway (police can kick you out) or ask people at the nearby petrol station, KFC or parking lots. None of the places is good (1st and 2nd option are recommended).

It's good to have a sign at this road and definitely for south direction. Every bigger petrol station at D1 is good for hitchhiking.

Easily reachable petrol station, not a lot of traffic though. Good in bad-weather or snow conditions. Go to the metro station "Chodov" (red line C), there is big shopping centre, try to not get lost there and find the road "Roztylská" going through it. Go to the traffic lights at the end of this tunnel and continue by following cyclopath - yellow signs with "Záběhlice" and/or "Chodovec" written. After 700 m you will get to the bridge over the motorway. Use the staircase at the beggining of the bridge to get down to the petrol station.
Alternatively you can stay behind the station exit at the end of left lane, at the left side of the road.

From metro station "Opatov" (red line C) follow the main road up. Walk along the road about 5 minutes, keep going over the crossroad and the bridge over the motorway. Now you might see other hitchhikers on the slip-road. Alternatively, you can take bus number 177 from metro "Opatov" to next (request) stop "U Dálnice". Be careful and stay on the slip road, not on the motorway (sometimes police passes by).
Very common spot, not so good in fact. Average waiting time is less than one hour. If you stuck there, you can walk 2 km to the spot 4 (again, if police goes around, they'll tell you to walk on the field beside motorway).

Especially good option at night when there is little traffic at spots 1 and 2. At the end of bus stop opposite to metro station "Kačerov" (red line C), find stairs going down. You will go over train tracks, stairs down again, then around metro tracks and turn right before the motorway. You will see OMV petrol station but just cross the grass strip and 2 lanes leading to the station and stay at the shoulder at the beggining of motorway (there is sign). Police doesn't make troubles there and for cars it means end of 50 kmph limit, so they're still quite slow. The shoulder is wide, safe and alight.
There are not many cars at that petrol station behind or they have different directions (often Pilsen). 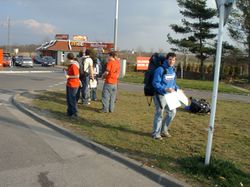 Hitchhikers at Újezd u Průhonic petrol station. Regular local hitchhikers were around, as well as hitchhikers doing the race.

First motorway petrol station behind Prague, really good hitchhiking but takes extra time to get there. From metro "Opatov" (red line C) exit straight out of the station and take a left following the winding red ramp up to street level/the road above. Look on the bus stop timetables (bus stop next to the Replay shop) for the stop "K Sukovu" on route 363, the buses leave every 15-30 minutes. You have to show valid ticket or buy one from driver!

Get to "K Sukovu" (takes roughly 10 minutes) – you'll know you're there when you see the petrol station in the distance to your right after getting off the bus. Follow the main road in bus direction and after 400 m go over motorway bridge and down to the petrol station on your right.

Quite near city centre, cars are slow, high traffic density and nobody expect hitchhikers there but you can be lucky. At metro station "Vyšehrad" (red line C) get to the right side of the main road - one is leading to the huge bridge and city centre, opposite is yours - and use the sidewalk for about 300 m. After the small bridge, continue left to the main road and hitchhike. There are 3 lanes and one parking lane and ussualy some place to stop.

Go up from metro station "Roztyly" (red line C) and cross all the parking places to the motorway. Hard shoulder there is good and alight at night but it's not allowed to stay there. And cars are already a bit fast.

From Smíchovské nádraží (subway line B) take bus 129, 241, 243, 244, 314 or 318 to the stop Malá Chuchle. It's a request stop so press the button. There you can easily hitchhike. Usually very short waiting on Friday afternoons when many people go out from Prague.

This is good option for Karlovy Vary direction. Take tram 22 to Bílá Hora. Go straight in the street Karlovarská and there is quite good place to hitch-hike behind the red-white banister.

If you want to start a bit further outside, take a train (www.idos.cz) from Prague Masarykovo Station, to Jeneč, which 15 km outside and very close to Prague Airport. Just 200 m from Jeneč train station - on the other side of the train tracks - is a motorway junction from which it is pretty easy to get to Karlovy Vary.

If you prefer gas stations, try this option. The first one is quite far though (30 km from Prague center) - take a bus from Praha-Hradčanská (Metro Dejvická) to Velká Dobrá, u skoly. Once there follow the direction of the bus and turn first left (Unhošťská street), than second right (Lesní street) and after 200 m you should see the highway and the gas station on your right.

From Dejvická (subway line A) take bus 119 to Dědina. There you can hitchhike. You can also try another bus stop on Evropská road e.g. Divoká Šárka but probably further is better.

Blackriding in the subway is not advised, as ticket inspectors are more common than in years past. They will ask you to show a passport, and if you refuse, they are very likely to take you to the police, who can demand immediate payment before they will let you go.

At metro stations you can find maps of Prague with public transport, this can be useful, because the lines are changing (especially bus lines). You can easily find a connection online at IDOS - works for the entire CR or alternatively for Prague only: DPP.