Difference between revisions of "Munich"

Munich (München in German) is the capital of Bavaria.

Option 1: Take the Subway 6 to Studentenstadt. From there walk about 300 m north on Ungererstraße until you are under a bridge. You will see signs for the motorways. This leads directly to the A9, a quick and easy route to Berlin or Nürnberg. For i.e. Köln it is best to stop at the Rasthof Nürnberg/Feucht as the freeways converge here. To continue on A93, i.e. Regensburg and Dresden you can change the car at Rasthof Fürholzen some 30km north of Munich.

The roadworks mentioned by Sitarane are now finished. Although traffic wasn't heavy, I found this to be an excellent spot and got a ride out within ten minutes.
It is illegal for cars to stop here so when one does, it might be best to take it to the next Rasthof and continue from there if they aren't going far. 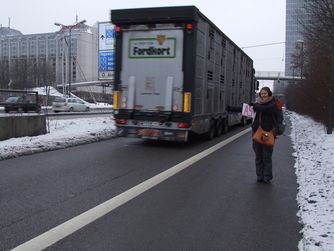 Option 2: Take Subway 6 to Nordfriedhof. Take the north-west exit from the station (front-left if you go from the city centre). On your right you will see a two-lane road going out of a tunnel. This is the spot. You can get there crossing the bushes on it's right side. Beware of the ants. The cars are fast there but can easily stop, because only one lane is open for cars, what makes the second a perfect place to stop.

Option 2 seems to be a lot better than the above, for two reasons. First, there is a lot of space for cars to stop. Second, all cars on this road go straight for the highway.

Option 3: Take the S1 to Eching. Follow the road next to the station in the same direction of travel (north-east) as the train you leave. Walk under the autobahnbridge, once you are at first the crossing over the S Bahn take the bike path (it will turn a bit). You will go over another bridge and then need to head to Fürholzen. Once in the town, walk through it until you take Günzenhauser Straße to your left. Follow the road around to the right and you will see the Autobahn. Raststätte Fürholzen is then in front of you. Here's a map

OR: Take the S1 to Eching. Pass under the railway to the side where the trains head back towards Munich City and walk the bike path along the railway in the direction you arrived by train until you reach the first bridge that goes over the railway (around 100m). Shortly before the bridge, turn left to reach the road coming down from the bridge (Paul-Käsmeier-Straße). At this crossing (marked with B in this map) , you can hitchhike easily to the next town Günzenhausen and walk towards Fürholzen. This road will underpass the motorway, few meters later you'll find a small road to the gas station "Fürholzen Ost" (marked as C in the same map).

The A8 begins inside the town. A few hundred meters before the beginning, there is a bus stop called Ramersdorf, so enough place to stop. Take a subway to Karl-Preis-Platz or just walk from the town centre along Rosenheimer Straße. This is far from an ideal spot, as it's very difficult to catch the attention of the drivers in this spot, and there is too much urban traffic and buses. If you do choose this spot, make sure you have a very visible sign.

The easiest way to get out towards Rosenheim is to get the U-bahn/S-bahn to Ostbahnhof. From there, turn left onto Orleansstraße. Keep walking until you get to Rosenheimer Straße. Take a left when you reach it. About 500m on the right-hand side is a Shell gas station. There is also a bigger Aral gas station another 300m further on the same road. This is probably the best option for getting a hitch. There are also a good couple of places for cars to pull in before and after this gas station so if the through-flow is bad you can always try this.

Or walk straight after seeing bus station Rosenheimer Straße pass the street, pass the huge sign A92 and stay at the and of the fence and when any car stop just him to drop you at Rosenheim service station or if you want to go to Balkan make sure that you get out before A10 in Austria.

It's possible to put Rosenheim on a sign, which is the next city along the motorway. Close to Rosenheim, there is a huge service area (Irschenberg), where you will surely get a ride to Austria.

I went near the bus station Rosenheimer Straße, and little bit further at the left, there is a petrol station, it s not a really good place as the road is turning at that place, but at least cars can stop, and it seems to me as the best place there.

Consider getting on the

to Passau. Most of the international traffic (trucks) are going East by Passau while most of the traffic passing by Salzburg is going to Trieste, Italy.

Bikepunk Got stuck 14 hours at a huge Petrol station around Salzburg trying to get a ride to Vienna.

The best spot to start your hitchhike is on Fürstenrieder Straße. There is a bus stop 200 metres after the crossways Würmtalstraße-Fürstenriederstraße. Cars can easily stop there. Use a sign (A 95, or Garmisch). In the evenings you can try to get a lift at the traffic light at the crossways. Both spots are not really good but okay.

Another spot to try is near Neurieder Straße; there is a petrol station around 500 metres from the A 95 and a slip-road with a sign for Garmisch-P. The slip-road is not ideal as there is little room for cars to stop, however the petrol station is situated by a high volume of traffic and has ample room. Both sites can be easily reached by taking the U3 U-Bahn to Fürstenried West.

The A96 begins inside of Munich. Close to the on-ramps of the motorway there is a petrol station (Aral) that is frequented by many people before they go onto the motorway. It's pretty big and the traffic flow is good there. I got a lift to Konstanz within 20 minutes of waiting there.

The petrol station is easily reachable by bus line 133, direction Forstenrieder Allee. Exit at stop Siegenburger Straße. (Coming by line 133 from the other direction might be tricky as you would have to cross a road with 6 lanes. The traffic lights are quite some walk away).

Second option is to take the s-bahn number 8 (S8) to Neugilching, and walk on the main road 'Landsberger Straße' in the same direction where the train is going, in 800 meter you will see in the right a petrol station and Make death(MC), there you can ask people for a lift for your direction or just for the gas station in Landsberg, where are more cars stopping. Also u can hitch from the ramp to the direction of Lindau, i waited there few minutes.

If you want to travel to any city on the Bodensee, lookout for Swiss and Austrian cars as they all have to pass near to Lindau where they can come off the highway to drop you off and get back on it again easily - and this only takes them 2 minutes out of their way.

From the central railway station (Hauptbahnhof), take tram S2 towards Petershausen. Get out at Obermenzing. There along the street you can either walk the 2-3 km towards the motorway, or take bus #143 towards Blutenburg.

The bus #143 stop is across the road from the S2 exit. If the bus is not leaving for a while, you can easily hitchhike at the traffic lights nearby. I would advise putting 'Augsburg' on the sign. There is a service station, Rasthof Augsburg, just before this town, which is closed as of May 2013, expect a long waiting time at Augsburg - as long as Rasthof Augsburg is closed it's better find a ride all the way to Ulm. Update: When Insa and Jan were at the Augsburg station on 15 May 2013, the construction work was apparently just finished. Still, the spot is a bit hard – but if you go around and ask people you should manage.

This stop is located directly in front of a roundabout, and KFC where the A8 for direction west starts. There's enough place for cars to stop in front of the roundabout. Expect high traffic. Literally stuck my hand out here and got a ride within 30 seconds. There are so many cars here! For the petrol-station-lover, some meters before a small petrol station is located, so if you're bored, go asking people there. Make sure to carry a sign where you want to go as the motorway will split after 2 km towards different directions. It is really easy to get a lift from there.

This is also a great way to get to Frankfurt as you can hitch to Ulm, north to Würzburg and then west to Frankfurt.

The A 99 is the Munich ring road (http://www.autobahnatlas-online.de/A99.htm). While not as accurate as other south south/north bound jumping off points, the service station Rasthof Vaterstetten Ost is a good point if seeking to get lifts from long-distance lorry drivers, many of whom stay overnight here. This service station is located at the A99 in Feldkirchen. It is located only 2 km from the S-Bahn station Vaterstetten and requires walking through the small village to the back of the service station. 1,000 trucks or more park here here every night with many more passing through, heading north and south. While I would not like to sleep here (with a 1,000 plus lonely men), its a excellent place when heading both north and south. Make sure to carry a sign indicating what motorway who are hoping to take. For example, the A8 to the the South and East or the A94 to Passau.

Maybe not the most comfortable place to sleep, but always open and not busy at night is the airport Franz-Josef-Strauss at A92 (from Regensburg). Hitchhiking away from there (late) in the evening is a pain, but if you end up there, you can count on a dry and warm night. There is no waiting hall (there are no flights at night) but enough restaurants where you can pick your bench and toilets are open any time.

Located in the center and always open is the Munich main train station. If you get stuck in the city, this is probably a better solution than the airport which unfortunately is pretty far outside of Munich, but don't expect it to be more comfortable. There is no waiting hall and only a few benches on the platforms, but it is common to find some people resting on the first floor of the main entrance hall (right next to Burger King) and tolerated by the Deutsche Bahn security guards as long as you don't intend to crash there for more than a single night. If asked, just tell them you wait for a train that leaves early in the morning and they usually leave you alone. You can sneak into the toilets of the two Burger King restaurants around (free, but closed from about 3:30am), or use the toilets of the main train station (50ct minimum). Another advantage over the airport is that it's quite easy to get back to any hitchhiking spot from here.