Minsk (Belarusian: Менск IPA: [mʲinsk]; Russian: Минск; IPA: [mʲinsk]) is the capital and the largest city in Belarus, situated on the Svislač and Niamiha rivers. As a capital, Minsk has a special administrative status in Belarus and is also the administrative centre of Minsk voblasć (province) and Minsk rajon (district). It has a population of 1,921,807 inhabitants (2014). Urban area that includes about thirty satellite towns reaches 3,000.000.

Take Metro (2nd (red) line Aŭtazavodskaja linija) to Mahilioŭskaja' ("Магілёўская") station, then take a bus #112 to Sokal get off at the junction with M1. You can try hitching just after the junction or walk 1.5 km towards junction of M4 (towards Mahilioŭ) and M5 (towards Homiel) roads.

Buses, trolleybuses, trams and underground are equipped with unified payment system. You can pay with a special card (sold in kiosks) or with a paper ticket (token in the underground). In mini-buses (maršrutka) you pay straight to a driver. Tickets for city-trains are bought in ticket offices at the stations of from a conductor on a train itself (costs more). 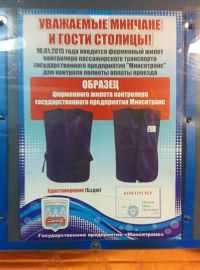 Blackriding in ground transport is possible. All ticket inspectors wear uniform (although it has become harded to notice them recently). So if you notice inspectors standing at the bus stop, just get off. They won't do anything to you.

In underground it is almost impossible to blackride as there are turnstiles there (both at the entrance and exit) and a person keeping order (usually together with a policeman). The only option which works well is "Kupalaŭskaja/Kastryčnickaja" station. You should use the entrance at the corner of praspiekt Niezaliežnasci (Independance avenue) and vulica Enhielsa (Engels street) and pass through the exit doors (to the left from the entrance itself). This exit is not equipped with turnstiles so you can easily get in. But be careful and don't let a person who keeps order or a policeman notice you.

There are conductors in city trains so blackriding is hardly possible.