Difference between revisions of "Karlsruhe"

Karlsruhe is a city in Germany in the federal state (“Bundesland”) Baden-Württemberg, located close to the French border and connected by the A5 and A8.

The A5 is passing Karlsruhe and connects it to Frankfurt am Main, Basel, Stuttgart and other cities. The best ramp for the directions North and East is Karlsruhe-Durlach. Take the tram 1, 2, S4 or S5 to Weinweg. There is a petrol station close by where you can ask people, or you can stand nearby the exit of the petrol station - around 10 meters away from it. There is a safe place where the people can turn off behind you. You can also stand directly on the ramp, waving a sign or a thumb. The hard shoulder serves enough space for anyone to stop, but the cars go a little fast.

Near Bruchsal, there is a very huge service area at the A5. It's about 40 minutes by tram and bus and the fare is 3 EUR. See Bruchsal for details.

The Bus Station Beiertheim West makes a good hitchhiking spot in direction south (A5, Basel) but there are also many cars going in direction Stuttgart or Landau. It is served by the bus no. 062 from Hauptbahnhof or Entenfang, but you can also take tram no. 2 to Welfenstraße or just walk 10 minutes from the main train station along Ebertstraße.

Update August 2016: I tried to go to Strasbourg but had the impression that nobody goes there by this way. That's why I went by tram S5 from Europaplatz to Wörth Bahnhof and took the train to Lauterbourg, so passing the border by train. The secondary road in Lauterbourg leads to the A35 and it was quite easy from there to get a lift. Even if not every car goes directly to Strabourg they will take you some kms and you are going to be in Strasbourg quite quick (or at least in my case it worked well). 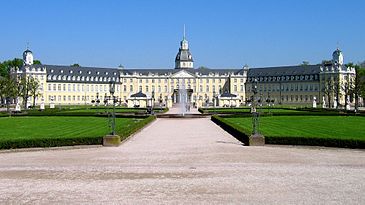 There is a camping site in Durlach, which is somewhat expensive though. Just take a tram to Durlach, there is a lot of signs for it. Karlsruhe also has a quite active Couchsurfing community.

There is only one hostel in Karlsruhe and it's rather expensive.

If your driver is not going to Karlsruhe, but only passing it on the A5/A8, there is no really good place to get dropped. All the motorway exits are big junctions where it's not possible to enter the motorway again directly. The most practical place are probably the exits Zentrum and Durlach. You driver will loose about 5 minutes, but you will get dropped right next to a tram station that is served 24/7 (10 minutes journey to the city center).

In the town center, between Europaplatz and Marktplatz there are a some info terminals called blue spots where you can see town maps, send emails and surf the internet for free.

Public transport is quite good. The tram lines go into all the neighbouring towns. Within the city, they go 24/7. Fares are about 2 EUR per trip. Tickets are checked quite often, even at night. wikipedia:Karlsruhe