Hitchhiking is very common in Israel. Hitchhiking is often done by pointing to the ground with the pointing finger far from the body, instead of raising a thumb. But possibly raising a thumb will be understood as well. Variations exists such as pointing straight down while bobbing the hand up and down to indicate a short distance hitch, or pointing right or left to indicate a desire to turn right or left at the next major junction.

Hitchhiking in Israel is usually done without a sign, since stopping in almost all junctions is possible. An exception for this is the new Road 6, in which stopping in only possible on on-ramps and petrol stations. 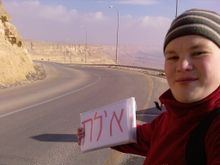 The most usual way to start an hitchhiking journey is to take a bus out of town, to a junction in your direction. Almost every junction has a hitchhiking spot (the famous Trempiyada), or at least a bus station where drivers can stop. Many drivers stop in such a place simply to drop or pick up people, not for picking you up - approaching them can still pay off well though, as often they will pick you up anyway. guaka's wild guesstimate is about 20% of the time, definitely worth the walk, the gesture and the smile.

In some places, like Tel Aviv, it's very hard to hitchhike from the city, and inter-urban buses are relatively cheap and can get you to the nearest junction. However, in Jerusalem it is possible to hitchhike to the suburbs from within the city, a practice used extensively among religious Jewish kids.

Like always, precaution is needed when hitchhiking, although in Israel hitchhiking is a way of life. You will find hitchhikers everywhere. Even still, caution is necessary.

You should remember that as a country in a sub-tropical region, it can get very hot in Israel, sometimes as early as March and as late as September. If you can, before hitchhiking check the predicted weather in the region of your travel, and if it's going to be hot, don't ignore it. Exposing yourself to heat without caution can be dangerous. In hot days, wear a hat and drink a lot of fluids, especially if hitchhiking in the desert. Suncream and sunglasses are also recommended.

File:Israel- erga hitching in rosh-pina.jpg
User:Erga hitching close to home in the north of the country

Politics of hitchhiking in Israel

It's common to get rides from Arab Israelis and from religious Jews. So it's wise to avoid talking politics unless you really know your ways and who you're talking to. guaka remembers a ride where the driver was listening to Arabic music, not speaking English, but indicating he "hates all Arabs", he just loves Arabic music. Tricky.

A lot of Arabs don't speak English, in which case it can actually be okay to approach them in Hebrew (especially if you're not a native speaker). Some Orthodox Jews prefer to speak only Yiddish, so it may be helpful to learn a few basic phrases in this language (hint: it's mutually intelligible with German).

Hitchhiking inside the West Bank comes with its own special intricacies.

Inside Israel (not in the West Bank) it's significantly harder to hitchhike at junctions close to Arab villages. Somehow cars coming out of the village are less likely to pick up hitchhikers. This could be because their wife is sitting next to them or someone of the closely knit network of the village is driving behind them. In such cases it makes a lot of sense to try to find out of the previous or next junction has different traffic (e.g. predominantly Jewish or further away from Arab villages) and to move on or back there.

In Israel people work on Sundays so you'll be fine, but Shabbat is a fairly bad 24 hours for hitchhiking there since religious people are not driving at all (and they're usually quite skilled at picking up hitchhikers) and there's generally less traffic, but particularly on smaller roads there will be a lot of people out with their families and people pickup hitchhikers more because there is no public transport. Note that Shabbat starts on Friday when the Sun sets and ends at sunset on Saturday. Friday night, a few hours before sunset and Saturday night, immediately after sunset, are both EXCELLENT times to hitchhike! Many people drive from rural areas to the "center" of the country, urban Tel Aviv or Jerusalem due to visiting family for the Shabbat (Jewish sabbath) - beware of the traffic jams!

Note: Israel shares borders with these countries; however, due to hostile relations between the states, it is illegal and probably impossible to cross over to Syria or Lebanon; Getting into Palestinian territory in the West Bank is quite straight forward, usually flashing your passport in the checkpoint is enough. Getting to Gaza should be problematic. Egypt and Jordan should be fine.

After Israeli forces closed down the Rafah border crossing, Taba is the only border crossing for passengers from Israel to Egypt. It is situated 5km south of Eilat, and is accessible by public transport from both directions. There are almost no cars passing the border, everyone does it by foot. Notice that if you plan to continue after Sinai, to Cairo for instance, you most likely need an Egyptian visa which is obtainable in the embassy in Tel Aviv or in Eilat. Bring with you 4 passport photos, 100 NIS and a photocopy of your passport. It takes around 4 hours for Western citizens.

To Syria and Lebanon

Not possible. You can't enter Syria or Lebanon coming from Israel (or with a passport that shows that you've been in Israel, even with just a stamp from a border crossing to Egypt or Jordan). It is also not possible to enter these countries and other Arab countries which have no diplomatic relations with Israel, if you have an Israeli stamp in your passport.

When entering Israel at Ben Gurion it's okay to ask the border people to not stamp your passport. However, this only makes sense if you fly in from Egypt, since if you go to the Syrian border from Jordan with a passport not showing how you entered the Middle East, they will simply refuse your passport.

At the Jordan crossings officials on both sides generally seem to not stamp your passport if you ask them to.

Egyptians generally always stamp. Your only way to avoid a stamp when going to Egypt from Israel is to go through Jordan, and take the ferry from Aqaba to Taba, Egypt.