Iran is a very friendly country, at least for male hitchhikers. Some hitchhikers on their way to India even decide to stay in Iran instead.

Hitchhiking is done in Iran by waving one's arm at an oncoming car, or by dribbling one of your hands. Do not gesture with your thumb up as in the West, because this is an obscene gesture in Persian culture.

Waiting for a ride can occasionally be a frustrating experience sometimes, but it is generally relatively easy to hitchhike here. Frustration comes when there is a driver stopping for you every few minutes and suggesting taking you to a bus terminal, and sometimes you may find it hard to explain that you travel at low budget and that you actually want to hitchhike.

When hitchhiking in the north of the country, it might occur that people stop just to ask if you need assistance unrelated to transportation. In fact, you don't stand longer than 10 minutes without some car stopping for you. It can be even a police/army vehicle (they are in every corner of Iran): they will pick you up and even stop a car for you and convince a driver to take you further.

In Farsi language (official language in Iran spoken as a first or second language by most citizens) the word "hitchhiking" doesn't exist. The translation of this word found in English-Farsi dictionaries seem to have a confusing effect on locals of Iran since they hear it for the first time in their lives. Though some people (especially couchsurfers or young Tehranians) know about it, call it "autostop" or English "hitchhiking". The Farsi majani savar shodan seems to be the closest. Useful phrases are: Do you go to ...? - shoma be ... mirin? Can you do me a favour please? - Mishe ie lotfi be man bokonin? Can you give me a ride to ...? - Mom kene man ro be ... beresoni? lotfan I don't want to pay - Man nemicham pul bedam

In the North West of Turkey (Tabriz area, until Qazvin), Turkish will work equally well.

Watch out when somebody says a ride is for free: it might in fact not be. Tarof is an Iranian custom of saying a white lie, which is understood by both parties. This enables everyone to keep face. For example, at the end of a taxi ride, the driver will say it's free, because tradition dictates you should be extremely hospitable to guests. If you reply with "na" (no), he will quote the real price. While you could ignore this, it can cause offense, as it is an integral part of Iranian culture, whether you like it or not. One of the more useful phrases is "Tarof nist?" (it's not Tarof?) with a rising intonation at the end. When the answer is no, you can probably expect the offer to be genuine. Maybe the answer is another instance of tarof, but you can probably stop playing the game at this point. 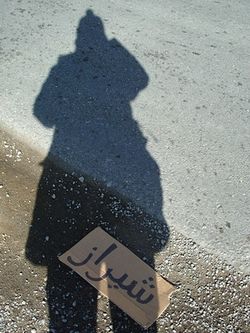 Hitchhiker Fran waiting for a ride in Iran.

You can't rely on it completely but if you're not American you can probably get a code through iranianvisa.com that you can use at Iranian embassies (this process can take up to 5 weeks). People successfully managed to get Iranian visas in Istanbul, Ankara and closest to the border, Erzurum. Some hitchhikers received their visa in Trabzon without the expensive code the same day they applied for it.

Hitchhiker Craig entered Iran at the Yuksekova-Esendere border. People coming from Turkey don't get frustrated! It's amazing if you know that a hundred meters back on the Turkish side most people would understand 'autostop'. Other than the young and modern Iranian generally won't know what is hitching. Tell them you have no money. You can explain everything later in the car. Iran is the best country I have ever hitched. Even in the hottest desert on earth (you feel dying after 10 minutes) the first car stopped. Roads are in good condition. Some days I my average hitch-hiking speed topped 100 km/h!!!

Hitchhiker alex: "Sadly, I had to fly into Iran. I did not manage to get a visa in Yemen or in the United Arab Emirates beforehand (I stayed 7 days in Muscat until the embassies opened again; they told me at the Embassy of Iran that they can only issue for residents in contrast to what I have been told before). Flying into Iran is an option for people from some privileged countries. Larger airports in Iran can issue a 14 days transit visa on the spot. However, I guess this is not an issue as most people here will travel the other direction and will only start their journey when they have this visa (since this is the only visa Germans can not get at the border)."

Finding a place to sleep in Iran is generally as easy as knocking the first door you come across. If you get tired of the unrelenting hospitality however, the city parks offer an excellent alternative. Many parks, even in big cities, are designated as camping zones, with toilets open all night. Camp fires are tolerated, but it's best to ask before. Sleeping in mosques is also possible, even though you should ask for permission beforehand. In this case, make sure you respect the segregation of sexes when travelling as a couple. Harveypekar slept in a mosque close to Mesr, only to overhear the Iman the next morning, explaining other travellers that it's impossible to sleep in the mosque. The iman was friendly enough though to show the other group the other side, as to leave him sleep his fill.

I have only experiences with hitchhiking in Northern Iran, Tehran Airport towards Turkey. However, this was quite easy and I assume that it is the same in the rest of the country. Many people do not know the idea of hitchhiking (you start a "conversation" with an explanation that you do not want to go to the bus terminal) but they are very helpful and hospitable. With the first drivers who gave me a lift I couldn't really communicate as we didn't have a language in common (most people I met spoke Farsi only) -- just hand, feet and PointIt. However, at a later stage many lifts I've got have been from people that spoke to some extend English. It is beneficial when you can read Arabic writing as Farsi uses an extended version of it even though many road signs are in Farsi and English. Many people say you are expected to pay drivers in Iran. Generally, I personally found it easy to notice if a driver is willing to give a free ride, or he expects money, - noticing this in time, it is easier to reject a ride if it is a latter case. Furthermore, I had some rides from couples and families, too. PS: As with in Turkey it is wise to have you own mug along as you are offered tea all the time.

The Persian weekend trick by Harveypekar

Every weekend, thousands of students from Tehran climb into their jeeps, and head out into the country side. It's difficult to catch them as they leave the city, but in the remote places, it's easy to pick them out. And in every car you will find at least one who speaks passable English. The downside is that Iranian weekends tend to make these places fuller, but as I was traveling in November, this was not an issue for me. This way, Harveypekar managed to hitch inside Alamout valley (but got trucks and motorbikes too), and also inside of the Maranjab desert. With that last one, he stayed with them two days, seeing nearby attractions and camping out with them. Because cars tend to be full, it might not work so well when you are more than one person.

Note from a traveler: weekends in Iran are Thursdays and Fridays!! Iran has almost the worst death toll due to traffic in the world. Be prepared to have a week or more adjustment time, even if you come from neighbouring countries. This applies mostly to crossing the road in cities, but be vigilant at all times. When on the back of a motorcycle, make sure to keep your knees tucked in next to the vehicle, as they pass very close to cars, and you might get hurt.

Opium is commonly consumed, so if you are not interested, make sure to not accept dodgy looking waterpipes (hooka/nargile/"hubble bubble") at people home's, especially in the countryside, unless you ask for the contents before.

Taking photographs is prohibited in many circumstances, especially of buildings related to policing and military use, as well as people in uniform. Surprisingly, it is also forbidden to take pictures of license plates, and is considered a quite serious offence. Playing dumb tourist is still the best way to get out of this situation.

Unmarked police vehicles prowl the streets of Tehran at night-time. While they don't check for hashish/opium, they do have breath analysers. After a party, it might be wise to consider staying there rather than going home.

Not all military installations and no go zones are marked on maps, so make sure you get advice from a local before you head out or stay on the road. An example would be the Maranjab desert.

These rules might seem conservative, especially as locals violate them all the time. On the other hand, as a foreigner, you run the risk of being made an example of, so you need to make your own judgement calls rather than follow what people around you do.

In any case, foreigners are rarely troubled, and are easily forgiven transgression of "islamic" laws on ground of ignorance. Violating the dress code, talking to woman in the street is no problem at all. Premarital sex is probably not ok, if you get caught. Stay away from demonstrations, you might be considered a journalist travelling on a tourist visa.