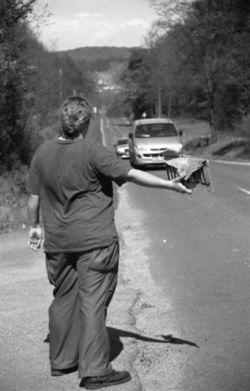 Hitchhiking in Hungary worked well for us. We have tried both with and without a sign, but in the end realized that the sign was necessary. It seems that many people here don't understand the thumb, especially (richer) tourists around Balaton. Speaking German proved useful, as almost no one in rural regions speaks English. Try to learn basic phrases in Hungarian to approach at service stations. Rebew (talk) 12:51, 15 August 2022 (CEST)