Difference between revisions of "Europe"

From Hitchwiki
Earth > Europe
Jump to navigation Jump to search 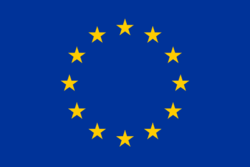 Hitchhiking in Europe is fun. There are many small countries to enjoy hitching through, motorways in the Western parts can be exceptionally good, and overall hitchhiking is relatively safe. Some countries such as Germany are quite easy to hitch around, for example, for the large distances in a single lift, or with the possibility to go really fast (especially where driving speed is not limited). England is usually good because of the relatively short waiting time. Most other countries are at the average or rather easy hitchability level, e.g. the Netherlands, Belgium and East European countries. Some other countries are considered bad for the long waiting times (like Spain and Italy) but even there you might get a ride if you are patient enough. Some people chose to skip a country, though, after standing in one place for over two hours - it is reasonable enough to do so if visually good hitch-hiking spot appears not working in some places.

Note: In France, Germany, Austria, Slovenia, Poland, Czech Republic, Hungary and Italy trucks are not allowed to use motorways on Sundays and on public holidays. (Any other countries?) However, these restrictions do not apply to those granted an exception, such as trucks transporting perishable goods and fuel supplies.

Hitching is rather safe in Europe. However, a single female hitch-hiker takes a higher risk because of obvious reasons. However, obvious it is not and it sounds discouraging here.

When hitching longer distances it's generally good to stick to gas stations on the motorway. People there go long distances and it's not uncommon to find rides of 500 km and longer.

It is more convenient to take a map on your trip but if you don't do so it is no big deal - some people actually prefer to get a feeling of lost nomads and to trust their own senses. For most of Europe (excl. the Eastern parts) the Marco Polo Euro Atlas is a great hitch-hikers's choice: it contains a detailed information about gas stations situated on motorways, and excludes less useful for hitch-hiking trips stuff like the index pages or city maps. For online usage: 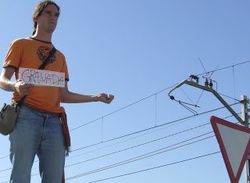 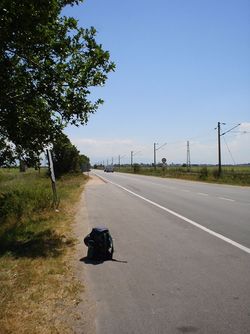