Deutsche Bahn AG is the German national railway company. Virtually all active train stations, most inter-city trains and also S-Bahn city trains are under it's control. Most regions of Germany now offer some kind of transportation network, local DB trains are usually included and the network's rules apply.

In general, they provide the most expensive public transport I've seen so far and are often at least some minutes late. Use alternative means of transportation whenever possible.

Blackriding in DB trains generally doesn't make much sense, because chances that you reach your destination without getting into some kind of trouble are rather low. If there really is no way to hitchhike, see below:

The following is based on personal experience, your mileage might vary :)

Plan A (regional trains only) 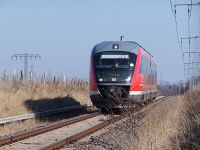 This is risky if there is no working ticket machine, because I wouldn't swear to the last part. I also once experienced a conductor actually hiding in the drivers cabin (they are often in there but you should be able to spot them). --Ben

experiences on small-range trains only, differences on long distances and ICEs?

This has happened to me twice (unintentionally) and I think it is a standard policy, at least if there is no train station with the Bundesgrenzschutz (German Border Control, who is also in charge of train security) nearby. Maybe that is because you can't get local police to just jump into a train (how do they get back to their car, after all?) and the conductor can't force you out of the train. You risk getting sued instead of getting fined, but I think the risk is very low. -Ben