Difference between revisions of "California" 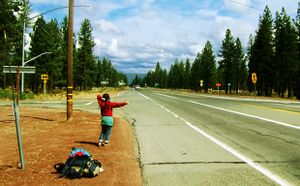 California is a state in the United States of America. Hitchhiking here is easier than in a lot of other states of the US. You usually won't be harassed by cops. The Central Valley is a concentrated version of the dixie-area "Bible-Belt", so getting around from Bakersfield to, say, Sacramento (and anywhere in between) is a real pain. The major urban centers are notoriously difficult to hitch out of too. It's usually better to take public transportation as reasonably far as possible, and then hitch from there. The Sierra Nevada (especially highway 395) and the Coast are a breeze for hitchhiking.

HOWEVER! Southern California, as in L.A. and San Diego, is an incredibly bourgie place which sucks for hitchhiking and is full of smug ass holes with surfboards and perfect bodies and shit who cheerily wave for hours w/o stopping. Avoid southern California if you can- I mean the weather is of course fabulous and it is a beautiful place all the same, I just got a lot of negative feelings about the people- if you have a bag and a sign and you're walking around downtown people look at you like you're a pile of vomit.

I-5 and CA-99 both run up and down the middle of California in the Central Valley, from Los Angeles up through Sacramento, Redding, and into Oregon. I-5 is a long-distance freeway; stick to truck stops. CA-99 is a more urban route, connecting towns and cities.

Route 1 goes up and down the Coast, with beautiful scenery, but not the easiest to hitch on for the most part. US-101 from San Francisco up through Marin (San Rafael), Sonoma (Santa Rosa), Mendocino (Mendocino) and Humboldt (Arcata, Eureka) Counties is arguably the easiest hitching in the US. Sonoma-north is all Redwoods, and it's beautiful...that is to say, if you have any time to spare at all, do take the 1! The following places are recommended: Big Sur, Jade Beach, Crescent City (CA-1 & US-101), have beautiful shores/beaches. Yosemite (Highway 120), Sequoia National Park, and the redwoods are a must. The Haight-Ashbury (or just "the Haight") district in San Francisco the famous epicenter of much of the 1960s' drug and music culture is long gone and beat like a drum, but you might meet a few interesting people there. Arcata is mad cool as well.

Vallejo seems pretty ghetto, though the rest stop in Vallejo is really good. It's full of Urban Sprawl.

Humboldt county is real good. They have a Hoopa Indian Reservation up there that is pretty good. They'll stop if you're walking on the side because they think you're one of them, and then once they stop they feel bad and give you a ride anyway. Lord Ellis peak took me about half an hour to get a ride to Redding.

Route 101, North from San Francisco and Route 1 South from the bay, towards Santa Cruz, are great roads to hitch, arguably the easiest hitchhiking in the United States. Incredibly beautiful scenery too.

Also, if you are heading down (or up) the coast, try and get to Mendocino. It's the county in Cali that produces the most marijuana, and there is this awesome communal farm there. Half the rides you get will even offer you a toke or two! Golden Gate Transit will get you up to Santa Rosa from the Bay Area, which is halfway there.

Highway 20, in between Yuba City (off Hwy 99) and Williams (off I-5) in Northern California is very, very bad for hitch hiking. Took 6 hours to catch a ride!