Difference between revisions of "Bern"

Bern is the capital of Switzerland.

Options follow in loose order of usefulness. Almost any lift can take you to the service area Grauholz which is some 5 kilometers past Bern, a sign Grauholz can usually get there as fast as the train in Option 3. Option 3 will tell you how to get to Grauholz directly.

From the train station, take tram #7 to Ostring (final station). Just stand in front of the motorway entrance. It's a fairly decent spot -- cars can't see you from far away, but there's ample space for stopping before the highway sign, and in case of rain you can shelter and hitch under the motorway bridge. A sign is helful since there are many potential directions for people to go.

This on-ramp is a bit closer to the center and has reasonable traffic flow. The on-ramp itself is not great anymore to hitch, it's an illegal spot to stand in and people are reluctant to stop since there is no dedicated shoulder (although there is a split in lanes where someone might stop). However you can position yourself before the 'Güterbahnhof' bus stop (best is with a sign) where people still go rather slowly and have a space to stop. The spot is to the West of the center: follow Laupenstrasse and then Murtenstrasse past the Inselspital hospital. You can take bus #11 to Güterbahnhof. You can also easily approach people (with a sign or without) at the traffic lights. This on-ramp also has cars going towards Thun. 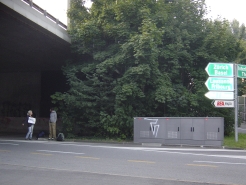 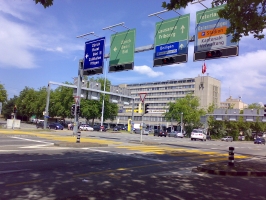 Take the S9 from Bern Hauptbahnhof to the end stop (Unterzollikofen), then walk over the fields eastwards to the rest area "Grauholz". It's all in fairly walkable distance and besides, probably a pretty lovely walk in the spring and summer months due to the sunflower fields. Take a picture from the map with your camera, it might come handy. Its Nr.1-Spot if you go north or east.

South-West towards Lausanne, Genève via Fribourg or Yverdon

Options follow in loose order of usefulness. Another option is to catch a lift to the service station Grauholz on the north side of the city (or check option 3 above on how to get their by public transport), change sides (there is a bridge) and ask at the gas station for rides south as it can be hard to find a ride going as far as the next service station to the south from any of the on-ramps below. If you're going to anywhere before Lausanne, be aware that there are two different highways between Bern and Lausanne and make sure that your on-ramp serves the one you want.

Option 1: Wankdorfplatz From the train station, take bus #20 to the station Wyler (buy a ticket 'zone 1-2' for 4 CHF, or don't). Walk 200m on the right side of the street (on your right you see a huge stadium, then cross the big crossroads. There's a perfect bus stop. Better use a sign.

Option 2: Murtenstrasse See Option 2 above. Doable spot for hitchhiking towards Lausanne, too. Either stand before the Güterbahnhof bus stop with a sign or walk up the on-ramp where northbound and southbound traffic split and hitch right there. Technically illegal, but odds are small that you will wait long enough to run into any trouble.

Option 3: Weissensteinstrasse Take tram 7 or 8 to Schlossmatte, for example from Hirschengraben near the train station. Backtrack a bit and turn right down Huberstrasse, before you turn right again and follow Weissensteinstrasse until you see the motorway signs. This isn't a very good spot as several directions meet very close to the on-ramp, but by working with signs, you can still get a ride down towards Lausanne.

Option 1: Ostring From the train station, take tram #7 to Ostring (final station). There is a place where many lanes come together and it's a bit chaotic for a hitcher, but luckily there is a stoplight you can stand next to, so during a red light drivers will be forced to look at you. There isn't enough space for cars to pull over, but not heaps, so keep your things close by and ready to chuck into the car when a spot is offered.

There are many hidden spots along the river where somebody could camp out for a night or a couple if the weather is nice.

There is a Wagenplatz by the E25 north of Bern, outside Bethlehem. You can get there taking a bus to Bethlehem b. Kirche or by tram 8. The nearest train station is Bümpliz Nord, one station away from Bern Hauptbahnhof. Walk up Eymattstrasse, past the bridge that goes over the motorway, across into a nice woodland. Take the first footpath on the right and keep to the right at the following forks. Eventually you´ll see lots of beautiful vans and trailers. People are very friendly and welcoming. There are two guest spaces. The coordinates are 46.960324,7.392554

If you go straight down from the Hirschengraben (close to the train station) following the tram-tracks, you will find a small park on the right side after a few blocks. It's a good place for sleeping out, but by the river is much better.

There is an emergency sleeping place called Sleeper, where you can get a bed for 5.-, breakfast included. But they only accept people in an emergency, not people who actually could afford a hostel bed. Check-in times are from 10pm-1am and you can stay till 10am. Be there soon enough, especially in winter time. You can't make reservations.

You can try contacting Zenit if you need help or just company. His home base is in Bern, even though he's not there so much these days.

There is also a Bakery (with attached vegetable-shop) which sells Sandwiches, Bread etc. from yesterday (they collect it from Bakerys in the City) and because its from yesterday they sell it for the Half of the Price. Its located in the Celler at Marktgasse 19 and the Name of the Shop is "Ässbar", open Mo-Fr. 9-19 and Sat 9-17.

Lunch:
Tuesday-Friday and Sunday at 12.30pm at La Prairie, Sulgeneckstrasse 7. It costs 5 CHF, if you can't afford that you can work for it in the kitchen. From the main trainstation go to the park "Kleine Schanze", on the right side of the park there is the street Sulgeneckstrasse and La Prairie just 50m from there.

Dinner/Supper:
Every day from 6pm-8pm at the Sleeper. It costs 5 CHF. The place is located at Neubrückstrasse 19. From the main train station, walk towards Bollwerk/Reitschule. Go behind the Reitschule building, cross two streets and you will see it. Bus 11 or 21 stop there, the stop is called Henkerbrünnli (which means Hangman's spring).

If you need to use a Computer for a shorter time: visit a Library. The most of them have Computers free to use but limited in time (1hr or so), but you can always ask to extend. In the National-Library ("Nationalbibliothek", Tram #8) you just need to ask the Person by the Computers (not the person in the entrance) for a Code.

There's a free internet café at Monbijoustrasse 16. Follow the tram lines of #9 south out of the center and find the Internet Cafe Power Point on your right hand side. The place is just for the unemployed and poverty-stricken, but if you're a penniless traveller, they'll likely let you use one of their machines for half an hour. [EDIT. Summer 2017. NEVER mention you are a traveller, hitchhiker or whatsoever. The moment we told the guy of the Power Point that we were hitchhikers he considered us to be tourists and mentioned that we were just pretending to be poor. AVOID these words by all means and ALWAYS say you live in Bern for long-term]

Alternatively, there also is a free, publicly useable computer with internet at the Autonomous School at Lagerweg 12. From the train station, go downhill towards and past the well-known alternative culture center Reitschule, cross the bridge, turn left and turn right. Open most days around 6-8pm, and at other times.

Bern's system of buses and trams is verry good and very dependable. Inspectors can often be spotted as they wear black pants and red or grey shirts, and of course they have bags/bum bags/etc. Update Winter 2019/2020: Not sure if its only in Winter but at the moment they wear black clothing (with little red company logo) and are harder to spot. Watch out for a machine they carry to check the tickets.

If you don't have an address in Switzerland (and don't plan to have one in the near future), you don't need to worry about being caught because there is no way you can be made to pay a fine. This even goes for EU citizens! (Info is from around 2015.) If you do happen to have an address in the country, lie, flirt and bargain your way out but don't show ID. Often the inspectors can be appeased by buying a Ticket from them or at the Ticket machine.

If you need to fix some Gear.

"Flickerei" Store - they fix all kind of Stuff for a very low Price. The Opening Times vary and can be checked on https://www.flickerei.ch. The Store is located in the Cellar, a bit hidden but if you take the alley at Laupenstrasse 5A just look out for Signs with "Flickerei". If you need to buy cheap-stuff to fix things: visit coop "bau&hobby" or "migros do it +garden"

Hang out in Bern

If you want to hang out, even if you dont consume anything, visit the Reithalle (autonomous social center) in Bern.

If it's hot just ask people for a "Freibad" (free swimming bath) or look out for people which are swimming in the river and join them (it's a local sport to swim in the river. Just watch out and ask where its ok! Dont jump simply "somewhere" in the river, there are some really dangerous spots!

Comments from users about Bern

unknown: "BEWARE people from the StadtNomaden. StadtNomaden is a 'Wagenplatz'(which is kind of a wagon-village, people living in caravans) that rotates evey six months from one place to the other. We knew most of them but some of them proved to be very dangerous bastards. Beware something else: in whole Switzerland drugs consumption is quite wide spread. You need to watch out, because many of them lose their heads."

waymarks: "DONT talk to people who ask you for buying drugs, they hang out sometimes in front of the cultural center (Reithalle). Police shows up often and people who buy the very shit they sell get caught easily." (You can talk to the people, even if you don't buy their shit. They might be happy for a friendly human interaction, who knows.)

Cities in Switzerland with more than 30.000 inhabitants