The A30 is a short motorway (129 km) in Germany. It connects the Dutch A1 (beginning in Amsterdam) with Germany and ends up in Bad Oeynhausen. It is an important section of the connection between Amsterdam and Berlin.

The A30 is a part of the E30 from Cork in Ireland to Ufa in Russia.

It crosses the A31 (Emden - Bottrop) near Schüttorf, the A1 (Heiligenhafen - Saarbrücken) and the A33 (Osnabrück - Paderborn) in Osnabrück. At its end in Bad Oeynhausen it is possible to go over to the A2, but you have to cross the whole city. A direct connection A30 -> A2 is planned and seems to be finished in 2015/2016.

The construction of this last part of the A30 began October 2008.

Travelling along the A30 seems different but it's not. Coming from the Netherlands, hitching at the service station Het Lonnekermeer near Hengelo is easy for getting rides at least towards Osnabrück or even further. The part between Bad Bentheim (where the motorway begins) until Osnabrück seems to be a bit more difficult to hitchhike, especially towards the Netherlands the traffic will be a bit less. It might be much easier to jump between two or three on-ramps (usual traffic: Bad Bentheim, Rheine-Nord, Ibbenbüren) instead of denying cars in hope for longer rides. Enschede-Osnabrück can be done like this within 1.5 hours or even faster. From Osnabrück on towards Bad Oeynhausen you will find enough traffic. 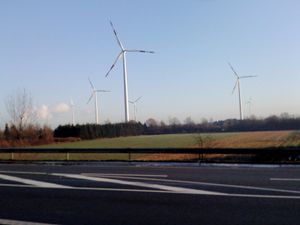 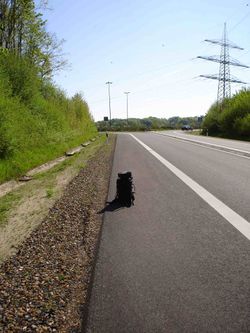 Ramp along the A30 (here: OS-Nahne) with hard shoulder.