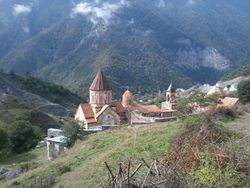 "The current system of getting your visa at the checkpoint makes life much easier. Just remind the driver that you need to step out at the checkpoint (Armenians aren't required to fill in any papers you see). As other posters mention below, make sure to have the name of a guesthouse to write down. Easy.

Stepanakert is easy to get around on foot, so depending on where you intend to go, just walk to the edge of town. Traffic between Stepanakert and Shushi is the heaviest in the region. I always carried signs, written in Cyrillic, which I found a great help. Stating the name of the place with a raised intonation is always a good reassurance... the driver will usually nod with a smile. Drivers here are very used to hitchhikers. While very little English is spoken, friendliness is palpable. However, there's no doubt that lacking knowledge of the Russian language was undoubtedly a drawback for me.

While you're normally never waiting more than 15 mins for a ride around Stepanakert & Shushi, on quieter days like Sundays be prepared to wait. When hitching back to Goris I stood for over 1hr on the highway beside the junction for Shushi (where I'd catch traffic coming from both towns). Of course everyone going past the junction is continuing all the way to Goris (maybe even Yerevan), so once someone picks you up you're sorted for the foreseeable future. Hitching to Agdam is possible (you'll get dropped off on the highway nearby), but unless you speak Russian or Armenian gaining entry is going to be difficult. The security forces are no longer permitting people to roam around the city, given the understandable sensitivity involved.

Random, perhaps irrelevant observation of mine.... people here tend to stare at you quite a lot (much more than Armenia proper). Being black haired and sallow skinned, I'm not sure why, but can only imagine it could be a little unnerving for female travellers. " - jamesor2 (Visited May 2019)

I recently travelled to Karabakh, in May 2017. As a solo female traveller, who has hitch hiked alone in quite a few countries, it was the first time I felt afraid at times. Many times men touched my leg, and/or asked for sex. While I was hiking along the Janapar trail a man invited me to his home for lunch with his family. I have experienced this type of hospitality in Central Asia, and I never had any problems, so I happily accepted his invitation. Afterwards he followed me, wanting to walk with me to the next village. He wanted to have sex with me so I went back into the village, and hitch hiked instead. I had another similar experience in southern Armenia, so afterwards I accepted invitations from women only. I also met many kind, friendly people, so overall, it was good, but sometimes it was difficult. I heard from another solo, female traveller that she had similar problems, so I decided to post my experiences, because I think its important to just be aware and cautious. Generally, i had more problems in the more isolated places, often with Sheppards.